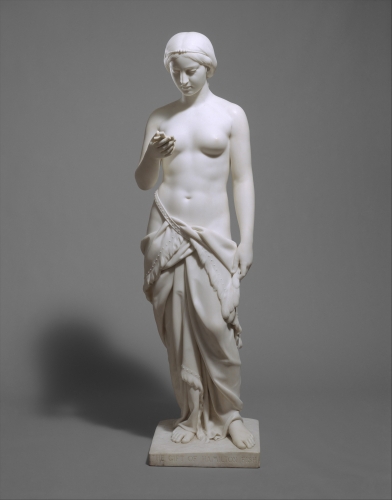 Erastus Dow Palmer is significant to art historians as the first well-known American Neo-Classical sculptor to pursue his professional career at home rather than abroad in Italy. He was a sculptor whose themes were often religious, especially dominated by Christianity, and the tone was often romantic and melodramatic.

He was born at Pompey, New York, and first worked as a carpenter and pattern maker, carving wood molds, and then took up cameo cutting. However, his eyesight suffered with the detail work, and instead he modeled portrait busts in clay, and then worked them in marble. The detailed work was detrimental to his eyesight, however, and he turned to modeling portrait busts in clay later to be put into marble.

In 1849, Palmer began exhibiting at the National Academy of Design in New York City, and in 1856, had a one-man show at the Church of the Divine Unity in New York City of marble relief medallions, which were called the Palmer Marbles. This event was “the most important exhibition of a single American sculptor’s work held to that date. Palmer’s reputation was made by the exhibition.” (Baigell, 261)

He also made money from his professional-appearing photographs of his sculpture, which had a good market both in America and Europe. However, he did not go to Europe until late in his career, and then stayed only a few months in Paris, which was unusual because most of his sculptor contemporaries were in Florence and Rome..

Famous works by Palmer are The White Captive, 1859, and Indian Girl/The Dawn of Christianity, 1853-1856, both at the Metropolitan Museum of Art in New York City. Both have subjects of innocent young white women, held against their will by Indians, and made lofty to many viewers by their reliance upon Christianity. Of the Neo-Classical sculptors, Palmer was likely the one who most frequently used religious themes in his work.