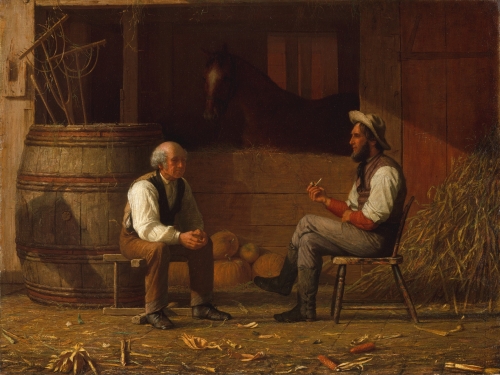 Enoch Wood Perry was a multi-faceted painter, whose wide-ranging subject matter included genre, portrait and landscape. He was born in 1831 in Boston. As a teenager and young man in New Orleans, Perry showed great enterprise and determination to be an artist. He saved eleven hundred dollars from his wages working in a grocery store from 1848 to 1852, and in the latter year went to Europe to study art.

He first studied in Dusseldorf, Germany with Emanuel Leutze from 1852 to 1854, then in Paris with Thomas Couture.

Perry’s maturity and focus were apparently recognized by others than those in the art community. He was only twenty-four years of age when he was appointed U. S. Consul in Venice. He exhibited his scenes of Venice at the National Academy of Design show in 1858 upon his return to the United States. His reputation was made, and he was granted an Associate membership in the Academy.

In 1860, Perry went to New Orleans after spending a year in Philadelphia. He was making a name for himself as a portraitist of the famous, including an 1861 painting of Jefferson Davis, President of the Confederate States. He would later paint Davis’s Civil War nemesis, Ulysses S. Grant. In Hawaii after the War, Perry painted the native royalty’s portraits, as he would in Utah, later, with a portrait of Mormon leader Brigham Young.

Known for his post-Civil War genre paintings, “The True American,” 1875, now in the Metropolitan Museum of Art, was one of the most popular. Many of his works appeared in Sheldon’s “American Painting” and Harper’s Weekly magazine. Perry moved from story telling in an academic style in his early to middle career–during which he left a valuable painted record of American furnishings–to a more painterly Impressionist view in his later work.

Enoch Wood Perry was a member of the American Watercolor Society in addition to the National Academy of Design. His paintings are in the collections of the Bishop Museum, Honolulu, Hawaii; Buffalo Fine Arts Academy; the Cabildo, New Orleans; as well as the Metropolitan Museum of Art, New York City, and Louisiana State Museum.