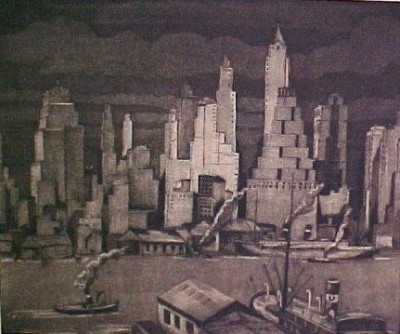 Ganso was born in Germany in 1895. At age 14, he apprenticed to a baker and then worked his way to America when he was 17. He worked in bakeries in Scranton, Pennsylvania; and Cincinnati and Akron, Ohio. By 1916, Ganso was out of a job, and living the life of a bohemian in New York City, sometimes on less than 30 cents a week.

In 1921, Ganso painted on a realistic nude on a bedsheet and was forced by the police to remove it from an exhibition. The bedsheet with the painting was later stolen. He soon had a job baking again at $140 a month, and with time to spare for painting and study. Ganso quit baking in 1925 when the Weyhe Gallery gave him financial backing of $50 a week.