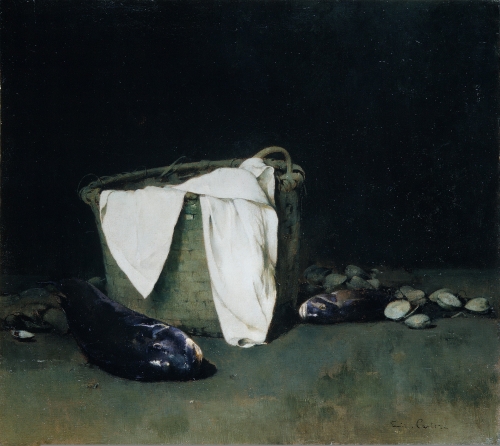 A painter of still lives as well as landscapes, Emil Carlsen was especially noted for his still lives of humble everyday objects in the tradition of 17th-century Dutch painters. His methods were precise and labor intensive with much scraping, painting, and then scraping again with a build up of impastos. He perceived art as pure aesthetics with its only language being color, masses, and rhythms of line.

Carlsen was born in Copenhagen, Denmark, on October 19, 1848, and not as widely assumed in 1853. He studied architecture at the Danish Royal Academy before emigrating to Chicago at age 19. He worked as an architectural draughtsman, and then traveled in Europe to study the Old Masters and also enrolled at the Academie Julian in Paris.

Returning to Chicago, he taught at the newly formed Chicago Art Institute, and this activity was followed by periods of living in Boston and New York, but in 1887, he moved to San Francisco to be Director of the California School of Design. There he introduced his students to the work of his New York associates including Augustus Saint-Gaudens, J Alden Weir, and John LaFarge. He also taught the concept that art, like biological matters, was evolutionary and that America might well be the next center of the art world. His association with Weir and other prominent American impressionists influenced his style of landscape painting and as a result, he “combined traditional representational art with impressionistic approaches to color and light.” (Zellman 472)

He shared a studio on Montgomery Street with Arthur Mathews, one of California’s leading art teachers and painters. In 1889, penniless and chafing at the long hours required to be a teacher, he resigned in disgust and returned briefly to New York. However, several months later he came back to San Francisco and until 1892 taught at the Art Students League. Then he left for good and returned to New York where he became successful, selling his pictures to major museums, elected to the National Academy of Design, and often referred to as the best still life painter of his time.