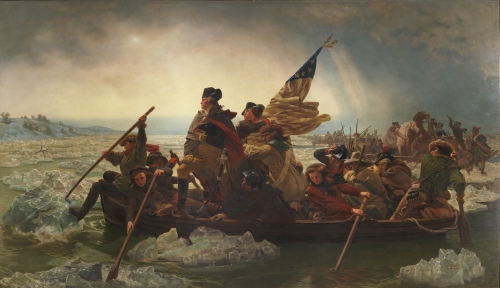 Brought to the United States from Germany when he was nine years old, Emanuel Leutze was raised in Fredericksburg, Virginia, and then in Philadelphia where he got his art instruction from John Rubens Smith. Early recognized for his portrait and figure painting, he became well-known in Lancaster County, Pennsylvania, and in Southern States where he was in Fredericksburg, Virginia.

In 1839, he returned to Philadelphia. Local persons, aware of his unusual talent, sponsored him to study at Dusseldorf Art Academy in Germany, where he stayed from 1841 to 1859. There the curriculum emphasis was on historical painting, and Leutze studied with Karl Lessing, German historical painter, and from this influence Leutze did a series of paintings on Christopher Columbus and the discovery of America. Most of Leutze’s history painting was based on English and American history.

Leutze left the Academy to set up his own studio and hosted and mentored many American art students and other visitors from the United States. He became the link between what is known as the Dusseldorf School of historical painting and the American School, which was also expanding into landscape and genre painting. He also traveled extensively in Germany and Italy.

Leutze is best known for two historical paintings, Washington Crossing the Delaware, 1850, and Westward the Course of Empire Takes Its Way, 1862. Ironically, Washington Crossing the Delaware was intended by him to buoy the spirits of German liberals whose Revolution in 1848 had failed, but it became interpreted as an expression of American patriotism. Many of his American friends in Dusseldorf were models for the work.

Its wide circulation in America was due to representatives of the New York gallery of Goupil, Vibert and Company, established in 1848 to disseminate in America, work by European artists, and to familiarize Europeans with American culture. Previous to Leutze’s painting, the company had circulated other mezzotints of Washington based on Gilbert Stuart’s Athenaeum-type portraits, but Washington Crossing the Delaware was “unrivaled in Goupil’s repertoire of American historical subjects.” (McIntosh 70).

However, delivery of the Leutze image to the public had a rocky start because in 1850, shortly after the painting was completed, it was destroyed by a fire. However, insurance money was sufficient to pay Leutze to paint another like it, which Goupil purchased for the equivalent of $6000.00, and which in 1853, engraver Paul Girardet used to make a large-scale line engraving, described in the Bulletin of the American Art Union, December 1850, as “a plate of the largest size ever used.” (McIntosh 71).

Six months later, Leutze’s re-painted and second ‘original’ canvas arrived in New York City, where it was exhibited at the Stuyvesant Institute. The painting was described in the October 18, 1851 issue of Literary World as “the best painting yet executed of an American subject.” Using this original painting as the promotional work, Goupil took orders for copies. For early subscribers before September 1, 1853, a black and white impression was $12.00. Then the price would rise to $15.00, and hand-colored impressions would be $20.00. Three years later Goupil’s print was reissued in a smaller version, and the company also offered photographs and cabinet cards. By the 1890s, Goupil’s successors were offering new versions of the image including miniature photogravure. Meanwhile Marshall O. Robert, a New York transportation magnate, purchased the painting, which ultimately was acquired by the Metropolitan Museum of Art, after it had circulated for many exhibition fundraisers including the Metropolitan Sanity Fair to raise money for Civil War veterans.

Because of the popularity of Washington Crossing the Delaware, Emanuel Leutze received much attention, although his name was generally forgotten by the American public in the sweep of Modernism* in the early 20th Century.

The last nine years of his life he traveled between New York and Washington D.C., and settled his wife and children from Germany in Washington D.C. In 1861 he had submitted sketches for a painting with a westward settlement theme for the west wall by the west staircase of the House of Representatives. Because of the popularity of Leutze’s George Washington painting and its association with patriotism, many persons had advocated for Leutze to do work for the United States Capitol. The advocacy had begun in 1851 when a Senator Cooper, friend of supporters of Leutze, gave a speech in the Senate suggestion that Leutze be given the commission that he received ten years later.

The sketches he submitted were the preliminary designs for the mural, Westward the Course of Empire, which progressed under direction of Captain Montgomery Meigs, Superintendent of Capitol Extension. However, an agreement with Leutze was not signed immediately because of the beginning of the Civil War, and feeling dismay, Meigs wrote on June 20, 1861, to the Secretary of War who had insisted on the delay: “For myself as superintendent of this great building it was with great regret that I saw the intended decoration of its stairway delayed and I would be gratified, all other expenditures upon the building having been stopped, to see in this time of rebellion one artist at least employed in illustrating our western conquest.” (Fairman, 202) A month later, the Secretary of War approved the mural painting, 20 X 30 feet for a sum of $20,000., and for a short time, the mural, completed within two years, was the only art activity at the nation’s Capitol Building during the first years of the Civil War.

In applying the paint, he used a method called stereochromy, a process he learned in Germany whereby watercolor was applied directly to plaster without losing color strength.

For Leutze, the purpose of his mural was to instruct and convey inspiration and not to be just pleasing to the eye in a decorative sense. However, this motive combined with his flair for dramatization left him open to much public criticism at a time when people were looking for diversion and to soothing genre and figure scenes such as those of Winslow Homer and Eastman Johnson. In a book published in 1869, Art Thoughts by James Jackson Jarves, Leutze’s work at the Capitol was described as offering melodramatic “slop work. . . . A more vicious example in composition and coloring, with some cleverness of details, could not be presented to young painters. Confusion reigns paramount, as if an earthquake had made chaos of his reckless design, hot, glaring coloring, and but ill comprehended theme.” (Fairman, 204)

Sources:
Matthew Baigell, Dictionary of American Art
DeCourcy E. McIntosh, “Fair and Square in the 1860s”, The Magazine Antiques, February 2006, pp. 68-73.
Charles Fairman, Art and Artists of the Capitol of the United States of America, 135 and 201-209
Peter Hastings Falk, Editor, Who Was Who in American Art