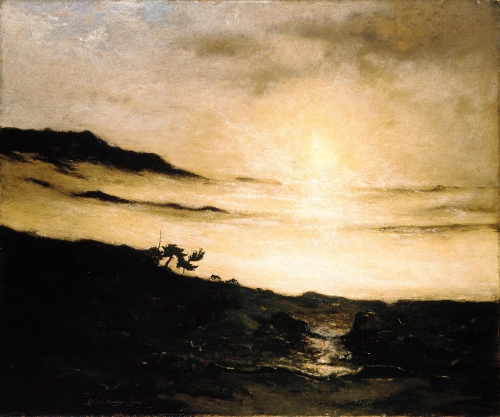 Born in Harper’s Ferry, Virginia, Elliott Daingerfield was a talented watercolorist who earned a strong reputation while very young but was most known for his depictions of the Grand Canyon which he first visited in 1911.

He painted his colorful, mystical landscapes from memory, and his oil painting, The Genius of the Canyon brought $15,000. in 1920. Likely this was the highest price paid to date for a work by a living painter. Completed in 1913, it resulted from his being part of a Santa Fe Railroad sponsored trip to the Grand Canyon of eastern artists. He regarded modernist artists as “anti God” and railed against them. He later had a studio at Carmel, California and frequently traveled into Arizona from there to paint the Canyon.

He was raised and educated in Fayetteville, North Carolina. At age 21, he moved to New York City to study with George Inness Sr. and Walter Satterlee at the Art Students League. Inness became a great promoter of Daingerfield’s painting, and he was soon exhibiting at the National Academy of Design and joined the prestigious Holbein Studios.

In 1897 and 1924, he was in Europe and became much influenced by the Barbizon School of painting. In the 1890s, he turned to religious subjects including a series of large murals for New York churches. He asserted that art was a vehicle of God’s expression, the “language of the spirit.”

After much ill health, he moved his studio from Blowing Rock to Gainsborough, North Carolina where he died in 1932.