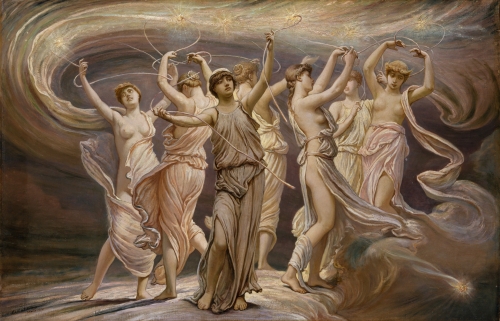 Born in New York City, Elihu Vedder was known as a painter of many esoteric subjects and was a leading symbolistic painter whose post-Civil War work evokes melancholy and tragedy. With the publication of “Rubaiyat of Omar Khayyam,” his illustrations set high standards for artist designed books.

He spent his youth in Schenectady, New York, studied art in New York City and Paris and then spent four years in Florence, Italy. Penniless, he returned to New York at the start of the Civil War and turned to commercial art including sketches for “Vanity Fair” and diagrams for instructing people in the use of dumbbells. At the end of the war, he left the United States and spent the remaining fifty-eight years of his life in Europe, primarily Rome and the Island of Capri.

In 1884, he published his major work, over 50 illustrations for “The Rubaiyat of Omar Khayyam. ” He created designs for the entire book and included intriguing drawings and hand-drawn letters. Based on the poetry of a Persian mathematician and originally written about 1120 A.D., the work had been translated in the 19th century by an Englishman, Edward FitzGerald, and had become treasured for its spiritual and poetic writing by aesthetes including Vedder.

The artist’s own life had instances of life and death that paralleled Khayyam’s message of fate, death, and renewal of life. In 1872, his infant son died, and the following year a daughter was born. His first born son died in 1875, and another son was born that same year.