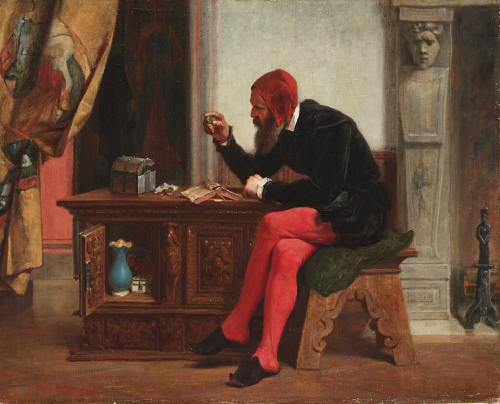 A genre, historical, religious and portrait painter, Edwin White was especially known for his history paintings that responded to the desire of many collectors to have American subjects. Among these was Washington Resigning His Commission, (1858) which recorded the Commander-in-Chief leaving the army after his victories that led to the forming of the American government. The work was commissioned by the Maryland Legislature, and White was the winner of their competition to select the artist. Other noted historical works by him are Pocahontas Informing Smith of the Conspiracy of the Indians; Major Anderson Raising the Flag at Fort Sumter 1862; Landing of the Huguenots in Florida, 1564; and The Signing of the Mayflower Compact.

White was born in South Hadley, Massachusetts and had studios in Bridgeport, Connecticut, New York City and Saratoga Springs, New York. He was precocious in that he began to paint by age twelve, and his accomplishments began to receive positive attention shortly after that. His formal studies included schools and artists in Dusseldorf, Paris, Rome, Antwerp and Florence. In Paris in 1850, he was in the atelier of François Edouard Picot, an academic Neo-Classical painter. Shortly after White’s arrival in August and enrollment with Picot, he wrote enthusiastically to the secretary of the American Art Union: “Paris appears to me as one of the most desirable places for an artist in the world. For whatever branch of the art he may choose to follow or study, he finds here the material, fine models, both male and female, costumes, and . . . furniture and other objects such as tapestry, armour, and old pictures.” (Weinberg, 50)

White was inspired by Picot, who did a series on famous artists such as Raphael and Leonardo da Vinci. In turn, White did paintings with titles such as Michael Angelo and Vasari at the Atelier of Titian (1850); Raphael and Fra Bartolomeo (1851), Murillo Sketching the Beggar Boy (1865) and Van Dyck in the Studio of Rubens (1869). He also did religious works including scenes from the life of Martin Luther.

However, White only stayed a year in Paris and then went to the Dusseldorf Academy to study history painting with Emanuel Leutze and genre painting with Carl Wilhelm Hubner.

He was a member of the National Academy of Design where he later was an instructor. Exhibition venues included the National Academy, Brooklyn Art Association, American Art Union, U.S. Military Academy at West Point, Boston Athenaeum and Pennsylvania Academy. Many of his works are in the collections of Yale University, Metropolitan Museum of Art, New York Historical Society and Museum of Fine Arts in Boston.

A critical description of Edwin White’s painting is by James Flexner in Volume III of his History of American Painting. He describes White as a “forgotten artist” and cites an example of bad painting being White’s Thoughts of Liberia. Intended to show a young black boy anxious to escape dreadful living conditions, White painted the supposedly dingy home of the boy with such “jewel-like brilliance” that the “protagonist’s dejection is completely out of key with this glowing fairyland.” (200)

However, many positive comments have been written about Edwin White whose work satisfied many people of the mid 19th Century who wanted a sense of connection and patriotism with their culture that in turn, they could like to Classical Rome and Greece.