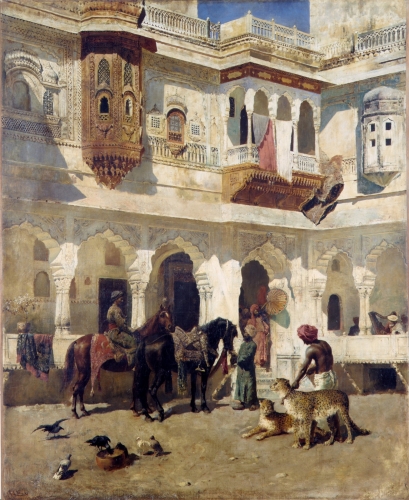 Edwin Lord Weeks was born near Boston and educated in Boston and Newton public schools, although he spent very of his adult life outside the United States. His artistic career began in 1869 with a sketching trip to Florida, then on to Surinam and other destinations in South America. Returning to Massachusetts, he for a short time painted landscapes and historical pictures in Boston.

Leaving Boston, he went to Paris where he studied with Leon Bonnat, and also under Jean-Leon Gerome at the Ecole des Beaux-Arts. Weeks, like Gerome, was interested in Oriental subject matter, and as a student traveled to North Africa, Spain, and the Middle East.

In 1872, he returned to Massachusetts, married his cousin, Frances Rollins Hale, and set up a studio. After less than a year, the young couple joined Robert Gavin, a Scottish painter, on a trip to the Mediterranean and Morocco. The rest of the 1870s he spent there, returning to Boston only occasionally to exhibit and do illustration work.

His work during the 1870s emulated Gerome, and his painting Departure from the Stronghold would be typical of the style he favored during this time. During the 1880s his paintings became more technical and detailed, as in The Gate at the Fortress of Agra. One theory for this change is that Weeks, who was also a photographer, found it more convenient to capture a scene on film while traveling, and then paint from the photograph when time permitted.

Paris was his base during the 1880s, and there he exhibited his paintings of India at the Salon of 1884, where he received positive recognition, and soon achieved national acclaim. He continued to make painting expeditions to Persia, Turkey, and India.

As well as being a painter, photographer, and illustrator, Weeks was also a writer. Between 1893 and 1895, illustrated accounts of his many travels appeared in Harpers and Scribners magazines, later appearing in book form as From the Black Sea through Persia and India in 1896.

After the 1890s, not much is known of Weeks work except for Three Beggars of Cordova, which is at the Pennsylvania Academy of Fine Arts. It seems to demonstrate a return to his painterly style of the 1879s. He received much recognition during his international career, and he belonged to several art organizations including the Boston Art Club and the Paris Society of American Painters.