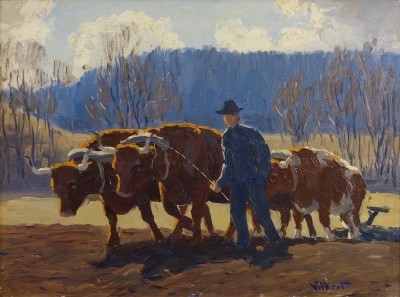 Of German heritage, Edward Volkert, an impressionist painter, became known as “America’s cattle painter.” In fact, he strove so hard to get their accurate depictions that he went to slaughter houses to study their anatomies.

He was born in Cincinnati, Ohio to parents who came from Alsace Lorraine. During his early career, he was primarily a portraitist, and felt freest when he was painting with watercolors. However, he ceased portrait painting as a result of feelings he had from a divorce from a marriage where he had two children. He turned to landscape painting, usually expressions of deep love for nature and of devotion to rural areas untouched by industrialization. Often his scenes were bucolic with grazing cattle, hence the special recognition for that subject matter.

Volkert lived for part of his career in New York where he was President of the Bronx Artist Guild. In 1922, he moved to Connecticut and settled in Hamburg, outside of Old Lyme. He, who had became increasingly withdrawn from the time of his divorce, became an active part of the Old Lyme artist colony, and enjoyed the sociability of the regular Sunday afternoon artist gatherings at the Griswold House. At these meetings, he asserted the need for American artists to break away from the bondage of European influences and find their own styles.

He later said that one of his primary motives for moving to the Old Lyme area was to paint the oxen used for their sure-footedness by local farmers whose land was very rocky. Of this subject matter, he said: “Oxen are twice as good as cows at posing” because they are always ready to stand still and are not as inquisitive as cows who “come over and investigate.”

Light was of special interest to him throughout his career, and it said of him that he “painted light and reflection like a master.” A reviewer in the Boston Sunday Post wrote: “He carries about with him a supply of bottled sunlight which he pours over cattle and landscapes with joyous prodigality.”

Volkert adhered to the impressionist method of using small dots of paint, which built a thickly painted canvas to suggest form through light and color. However, he abjured pure impressionism because he was so interested in actual form and color.

However, after the premature death of his daughter in 1933, he lost his drive to paint and never again lifted a paint brush. He was a committed Christian Scientist, and died in 1935 from refusing treatment for uremic poisoning.

After his death, his “Cattle Logs”, as he called them, were found in his studio. They were books of watercolor paper, each measuring 10 inches with miniature reproductions of most of the paintings he ever completed. His purpose was to be able to replace any painting ever lost or destroyed, so these logs were exact-to-scale and color miniature replicas.