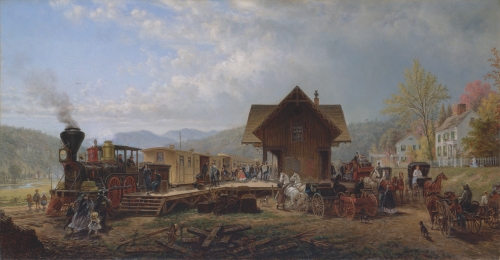 Born in Charleston, South Carolina, on January 12, 1841, Edward Lamson Henry, with a bent for nostalgia, became a noted painted of super-realistic genre scenes of early 19th century rural America. With minute detail, these works are now considered old fashioned, but they reflected the love of collecting old things that was stimulated by the 1875 Philadelphia Exposition. He also did portraits, and his series of railroad scenes are particularly notable.

As a child, Henry was orphaned and brought at age seven to New York City where he was raised by relatives. He showed early art talent and began study at age 14 with Walter Oddie. In 1858, he enrolled at the Pennsylvania Academy and then studied in Paris from 1860 to 1862 with Gustave Courbet and Charles Gleyre and traveled in Italy. However, he adopted none of Courbet’s dramatic painting style.

Fully trained as an artist, Henry returned to the United States in 1863, and served in the Civil War in the Quartermaster General’s Department. He recorded many war scenes on the James and Potomac Rivers, and this experience influenced his work in that he continued to depict transportation throughout his career. He also did battle sketches with the Union Army in Virginia.

In 1871, he returned to Europe, and then made another trip there in 1875 after his marriage. Henry was one of the founders of the New York Cragsmoor Art Colony, near Ellenville, where he and his wife built a home in the 1880s. He did sentimental paintings at Cragsmoor that reflected beauty rather than harsh conditions of the people or the rugged landscape.

Edward Henry exhibited at the National Academy of Design for sixty years. Many of his works are owned by the New York State Department of Education.