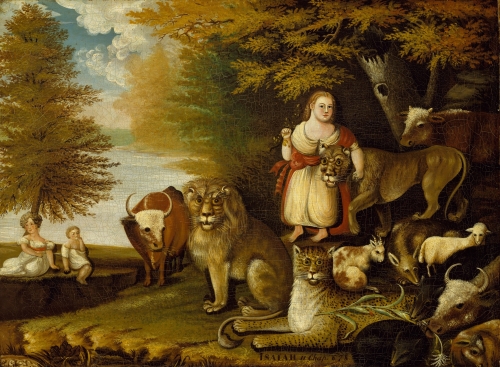 The 19th-century Quaker artist Edwards Hicks is arguably the most well-known and beloved of America’s folk painters. Born in Langhorne, Bucks County, Pennsylvania, the orphan Hicks was apprenticed to local coach makers William and Henry Tomlinson from 1793 to 1800, to learn the ornamental painting trade. By 1803 he had married Sarah Worstall of Newtown, Pennsylvania, and was received as a member of the Middletown Monthly Meeting. He became increasingly involved in his meeting’s affairs during these and the years immediately following, and by 1811 was recorded as a Quaker minister at Middletown because of his religious work and popularity as a gifted preacher. It was also during this year that he set up his shop in Newtown and commenced the ornamental painting business he would pursue for the remainder of his life.

Hicks was not trained as an easel artist, and had limited knowledge of studio techniques. As an ornamental painter, he was trained in various lettering styles, and knew how to paint heraldic devices and decorate signboards. The latter required knowledge of different fonts, gilding, mixing paints, color choices, drawing and composition, all skills he eventually brought to easel painting. It is clear from his writings and surviving paintings that easel art – the making of pictures – was separate from his shop production; it was also an activity that the artist quietly enjoyed, more as a means to augment and give expression to his religious beliefs and personal feelings, rather than his artistic aspirations. He profited very little from these works, many of which were created as gifts for friends and loved ones.

The 62 versions of Peaceable Kingdom currently known are the most famous of Hicks’ easel works. These appealing pictures, showing groups of gentle domestic animals existing peacefully with fierce carnivorous beasts such as bears, lions, wolves and leopards, have been widely studied and written about. Associated with them, because of their relationship to the artist’s religious life and beliefs, are a handful of other subjects, including depictions of William Penn’s Treaty with the Indians, which he painted in the 1830s and 1840s. This newly-discovered example (Penn’s Treaty With the Indians) brings the known number of these depictions to 14.

It is the largest known Treaty picture by Hicks, as well as one of the most impressive, in terms of its drawing, coloration and overall execution. I t is also closer in composition to its source of inspiration – Benjamin West’s 1771-1774 oil painting of Penn’s Treaty With the Indians, now in the Pennsylvania Academy of Fine Arts – than any other version painted by Hicks. West had displayed his painting in Independence Hall in Philadelphia in 1771, eight years prior to Hicks’s birth, so the Bucks County artist probably knew the West view from the widely circulated engraving after it by John Hall. The image became well-known to the Society of Friends as a whole, since it celebrated an event that reflected so well a core Quaker belief in peaceful coexistence.

In this Treaty, the large central gathering of dignitaries, including William Penn and other Quakers, the buildings behind them, and many smaller details such as foliage on the trees and the rendering of clothing, are reminiscent of West’s original composition, although Hicks eliminated West’s smaller gatherings of colonists and Indians in the extreme lower foreground.

The large size of this Treaty may seem curious to some, but it is consistent with Hicks’ approach to other subjects. There are, for instance, Kingdom paintings ranging in size from approximately 18 by 23 inches to 30 by 35 inches, and farm scenes that are rather small at 22 by 26 inches, and very large at 40 by nearly 50 inches. Some of the larger works were commissioned by family and close friends, or for use in specific locations. This may have been the case with this particular Treaty, although its early history and ownership remain unknown.

Other aspects of Hicks’ paintings not widely understood or appreciated are also evident here. The attempt to individualize the faces of the participants, by rendering them in a more realistic, painterly manner, is obvious when they are compared with similar such depictions in other Treaty paintings. The artist was fully capable of such work but tended to avoid it, probably fearing that the Friends would view such accomplishments as superfluous, akin to fine art painting, which would have been an unacceptable calling for a Quaker.

Hicks included a small vignette of Penn signing a treaty with the Indians in nearly all of his Peaceable Kingdom paintings, as an interesting parallel to the gathered animals derived from the Biblical prophesy in the Book of Isaiah: “The wolf also shall dwell with the lamb, and the leopard shall lie down with the kid; and the calf and the young lion and the fatling together; and a little child shall lead them; and the cow and the bear shall feed; their young ones shall lie down together; and the lion shall eat straw like the ox.” He also produced at least two signboards featuring the same subject, only one of which survives today, in the collection of the Newtown Historic Association, Newtown, Pennsylvania.