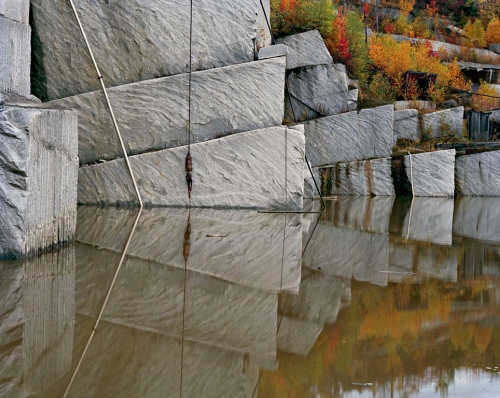 Edward Burtynsky was born in 1955 of Ukrainian heritage at St. Catharines, Ontario, Canada. He received a Bachelor of Applied Arts from Ryerson University and studied Graphic Art at Niagara College in Welland. Edward Burtynsky links his early exposure to the General Motors plant in his hometown to the development of his photographic work. The photography of Edward Burtynsky explores the intricate link between industry and nature. His photographs combine the raw elements of manufacturing, mining, oil production, quarrying, recycling and shipping into eloquent and highly expressive visions that find beauty and humanity in the most unlikely places.

Exhibitions of the photographs of Edward Burtynsky include Water (2013) at the New Orleans Museum of Art & Contemporary Art Center, New Orleans, Louisiana (international touring exhibition), Oil (2009) at the Corcoran Gallery of Art in Washington DC (five-year international touring show), Manufactured Landscapes at the National Gallery of Canada (touring from 2003 – 2005), Before the Flood (2003), and China (toured 2005 – 2008). Visually compelling photographs by Edward Burtynsky are currently being exhibited in solo and group exhibitions throughout Canada, the United States, Europe and Asia.

Edward Burtynsky has received numerous distinctions including the TED Prize, The Outreach award at the Rencontres d’Arles, The Flying Elephant Fellowship, Applied Arts Magazine book award(s) and the Roloff Beny Book award. In 2006, Edward Burtynsky was awarded the title of Officer of the Order of Canada and holds four honorary doctorate degrees, with a fifth to be awarded in 2013.

During his career, Edward Burtynsky has become known as one of Canada’s most respected photographers. The remarkable photographic depictions of global industrial landscapes by Edward Burtynsky are included in the collections of over fifty major museums around the world, including the National Gallery of Canada, the Bibliotheque Nationale in Paris, the Museum of Modern Art and the Guggenheim Museum in New York, the Reina Sofia Museum, Madrid and the Los Angeles County Museum of Art in California.