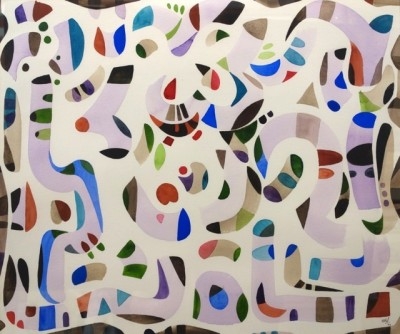 Edna Andrade was a leading Philadelphia teacher and artist who was associated with the Op Art movement. She created space-filling patterns that reversed themselves and played other illusionary games with the viewer. From 1957 to 1972, she was Professor of Art at the Philadelphia College of Art and from 1972, was Professor of Art at Temple University.

A retrospective survey of her work was held in 1993, titled “Cool Waves and Hot Blocks: The Art of Edna Andrade,” at the Pennsylvania Academy of the Fine Arts.

She studied at the Pennsylvania School of the Fine Arts from 1933 to 1938 and during 1936-1937 was a Cresson European traveling scholar. Commissions include a mosaic mural and mobile sculpture at the Free Library in Philadelphia.