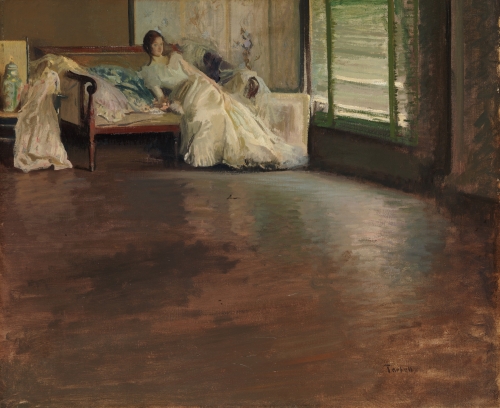 A leading Boston painter in the style of Impressionism, Edmund Tarbell was born in West Groton, Massachusetts, and raised in Boston where as a teacher at the Boston Museum School influenced a succeeding generation of Impressionists who became known as the Boston School. However, he always retained an element of realism in his work. His early paintings are most known for depictions of well-bred upper class women, fashionably dressed and at leisure, and his work was “among the most advanced in color and aesthetic of light of any American artist.” (Gerdts 92).

However, as Tarbell moved into the 20th century, his palette became more conservative with less emphasis on color vibration and more on indoor figure arrangements with elegantly appointed interiors. He also was a much sought after portrait painter in Washington DC where his subjects included Presidents Woodrow Wilson and Herbert Hoover.

When he first arrived in Boston, he was only fifteen. His father had died, and his mother remarried, and he was sent to live with his Boston grandparents. He took a job as an assistant at the Forbes lithography firm and then studied at the Boston Museum of Fine Arts School as a student of Otto Grundman, Frank Benson, and Robert Reid. In 1883, he went to Paris with Benson, and both worked under Gustave Boulanger and Jules Lefebvre at the Julian Academy. However, his major influence was Impressionism, a style that was becoming increasingly influential among French artists.

In 1885, in Boston, he began a life-long career as a portrait painter but gained his early recognition with his figural works, many of them posed in interiors. From 1889, he began a twenty-four year career at the Boston Museum School where, “despite the placid nature of his paintings, he was a peppery, assertive man with strong opinions. He became one of the most respected and feared art instructors of his day,…” (Zellman 570). In 1918, he moved to Washington D.C. and focused increasingly on portrait painting and also became Director of the Corcoran School.