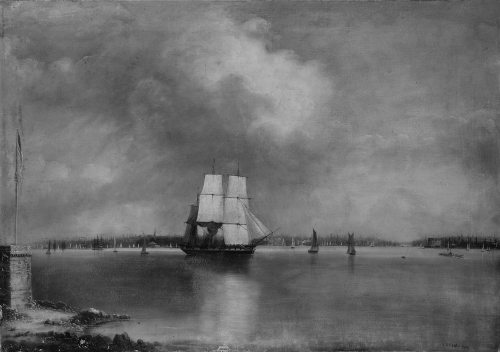 Bay and Harbor of New York from Bedlow's Island, ca. 1865

His paintings include landscapes of Canada and Italy although it is not known if the artist traveled to those countries or if other works inspired the scenes. He also painted in the White Mountains of New Hampshire and, listed as one of the Hudson River School painters, did numerous Hudson River Valley scenes such as Shipping on the Hudson River, 1855.

His painting titled Washington’s Headquarters at Newburgh, 1867, depicted a popular scene among the Hudson River painters because it was George Washington’s headquarters painted against the backdrop of Storm Mountain near the town of Newburgh.

Sources include:
A Century of American Landscapes 1812-1912, Frank S. Schwarz and Son, Philadelphia, 1986
Peter Falk, Who Was Who in American Art
John Howat, The Hudson River and Its Painters