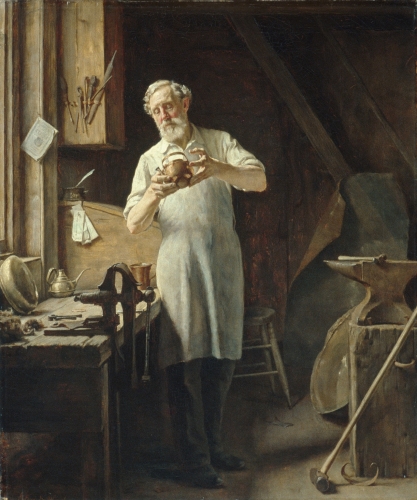 Born in Urbana, Ohio, Edgar Ward, brother of sculptor John Quincy Ward, became a specialist in paintings depicting craftsmen with his paintings soundly realistic in execution. He was a leading genre painter in his day. Ward’s professional life was spent mainly in NYC, though he also spent some time in France painting in Brittany and several summers in Fairhaven, MA. In the summer of 1880 he painted genre scenes of Blacks in Virginia.

While in Paris he trained with Alexandre Cabanel at the Ecole des Beaux-Arts. The French government admired his work enough to purchase a painting on behalf of the nation. Edgar Melville Ward was also a highly respected art teacher. In 1889 Ward became instructor of drawing in the National Academy’s school, and also in 1889 was appointed director of the school at the National Academy of Design. He held that post for 20 years.