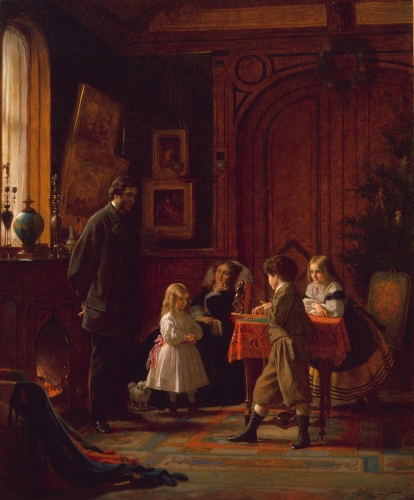 A native of Lovell, Maine and raised in Augusta, Eastman Johnson earned a reputation as a renowned painter of sentimental genre. His father operated a tavern in Lovell and also built homes there before moving the family to nearby Fryeburg in 1828. Again the father operated a hotel, which gave his young son much exposure to a variety of human beings and activities. When Eastman was ten, the family moved again, this time to Augusta, Maine, where Eastman became a clerk in a dry good store and where the family prospered.

He went to Boston at age sixteen to train as a lithographer but shortly after returned to Augusta and built his art career on more familiar territory. From there he moved from town to town in the 1840s, making a living doing crayon portraits in eastern cities including Washington D.C. where he used a Senate committee room. In 1849, he went to Dusseldorf, Germany to study under Emanuel Leutze, then traveled to Italy and France and spent four years at The Hague closely studying works of Rembrandt and Hals. Known there as the American Rembrandt, he was offered the position of Court Painter, but declined as he wished to return to America.

In 1858, he established a studio in New York and did portraits of many prominent persons. A year later, he was elected to the National Academy of Design with a painting titled Life in the South, regarded to that time as one of the most important genre paintings of blacks ever done by an American. This was a period in his career when he championed Black Americans in the South, During the Civil War, he painted The Wounded Drummer Boy, based on an incident at the battle of Antietam, and exhibited at the National Academy, it became a public favorite.

In the 1871, he set up a studio and house with his wife and baby on Nantucket Island, Massachusetts and painted landscapes and interiors there, using local people as models. One of his favorites was a bewiskered old sea captain named Charles Myrick. His genre paintings seemed to lapse in popularity, and he turned increasingly and successfully to portraiture of rich and famous people such as John Quincy Adams and Ralph Waldo Emerson.