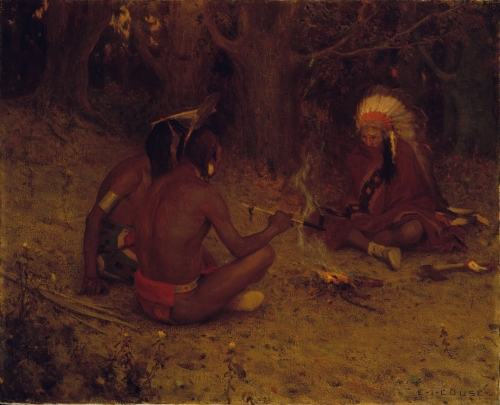 Born in Saginaw, Michigan, Eanger Couse is primarily known for paintings of Taos Pueblo Indian males sitting or squatting by camp fire light, suggesting that Indians were peaceful, dignified human beings and not the savages of Western lore.

Growing up in Saginaw, he lived among the Chippewa Indians and as a youngster did sketches of these native people. From a poor family, he was a determined artist who studied for three months at the Art Institute of Chicago, having earned just enough money by painting houses, and then he returned to Saginaw to earn more money so he could go to New York City which he did in 1885. He enrolled in the National Academy of Design and did many odd jobs to support himself, and after two years returned to Saginaw, again to earn money.

In 1887, he went to Paris to the Academie Julian where his great influence became the superb draftsmanship and classical techniques of William Adolphe Bouguereau. Couse returned to Paris many times, and on one of these trips met his future wife, Virginia Walker, an art student whose family had a ranch in Oregon.

When he and his wife visited her parents on a sheep ranch in Oregon, he painted the Yakima, Umatilla, and Klikitat Indians in the pastel colors of the French Barbizon School. However, there was little interest in Indian subject matter for fine art in America. He also painted pastoral scenes, which were more popular than his Indian subjects.

Couse went back to France and settled in a rural town in the province of Pas de Calais on the English Channel and painted bucolic genre scenes, invariably with sheep on hillsides. Although he had stylistic influences from Europe, he became more and more determined to create an art that was uniquely American and was increasingly fascinated with Indians as subject matter.

In 1902, Couse visited Taos, New Mexico for the first time, having heard about it in Paris from his friend, Joseph Henry Sharp. In Pueblo Indians, Couse found the subject matter that seemed right for him, but he had difficulty finding ones to pose because of their belief that the soul of the sitter passes into the picture once it is completed.

In 1912, when the Taos Society of Artists was formed, he was elected its first president, and in 1927, he and his family moved there permanently. His wife died two years later, much affecting his spirit and the vitality of his paintings.

Although he posed models for sketching outdoors, he continued to paint in his comfortable studio in a French academic manner. He also painted occasionally in Arizona, going first in 1903, to the Hopi ceremonies at Walpi.

His models for most of his New Mexico Indian figure painting were Ben Lujan and Geronimo Gomez, Taos Pueblo residents. The tone is poetic and peaceful and reflects a civilization that is at peace with itself. Usually the squatting Indian figures were engaged in domestic activity such as preparing food, and their handsome physiques were accentuated by moonlight.

Beginning 1914, his paintings were used on calendars by the Santa Fe Railway and became the basis for the company’s comprehensive Southwest art collection. The first calendar painting was “Wal-si-el, Good Medicine”, which initiated the tradition of using Taos painters on the calendars, and twenty-three of them had work by Couse.