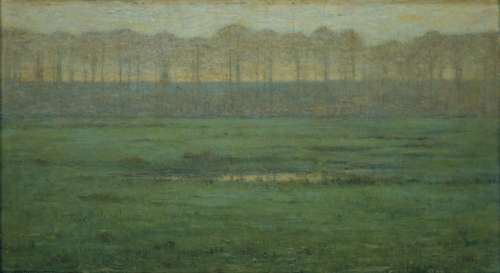 One of America’s first Tonalist painters and much influenced by the Barbizon School of painting in France, Dwight Tryon was also a long-time art professor at Smith College in Northhampton, Massachusetts, 1885 to 1924.

His characteristic canvases were muted, serene landscapes and seascapes that were popular during his lifetime but faded in public appreciation after he died. He applied his own techniques of infused light and atmospheric effects. His work has been described as relaxing to the eye and lacking the urgent vigor of many of his Impressionist contemporaries.

Tryon was born in Hartford, Connecticut and raised in East Hartford. He showed early art talent but remained initially a self-taught artist. His formal education ended at age fourteen when he began working in a firearms factory to help support his widowed mother. He began painting scenes of New England, often along the Connecticut River, while working at a subsequent job in a bookstore.

In 1876, having achieved some success in the marketplace, he sold all of his work for $2000., and he and his wife, Alice Hepzibah Belden, went to France to study art and attend lectures at the Ecole des Beaux Arts. He also worked with figure painter Abbott Thayer and with Jacqueson de la Chevreuse. The couple traveled throughout France, Holland and Italy and spent a summer at the village of Barbizon studying with French-Barbizon painter Charles-Francois Daubigny. He also worked with landscape painter Henri-Joseph Harpignes and J.B. Antoine Guillemet, both whom inspired him to paint quiet pastoral scenes whose messages were suggestive rather than straightforward realistic.

In 1881, Tryon exhibited at the Paris Salon, and that year returned to New York City where he opened a studio on 57th Street and began giving lessons. Almost immediately, he earned the life-long patronage of Charles Lang Freer, art collector and railway-industrial capitalist, for whom Tryon did many paintings including a series of seasonal landscapes for Freer’s Detroit home. As a result, a large portion of Tryon’s work is in the Freer Gallery in Washington D.C. Another patron of Tryon was Thomas B. Clarke, the first collector in the industrial age in America to favor American artists over European.

In 1883, Tryon opened a summer studio in Dartmouth, Massachusetts, a small fishing village near New Bedford, and a few years later he and his wife built a summer home they called the “Cottage”. Many of his paintings from that period are twilight and evening scenes in Tonalist Barbizon mode such as The End of Day and Newbury Haystacks in Moonlight. They show that Tryon was aware of the nocturnes of James McNeill Whistler, who also was much influenced by the Barbizon School.

In 1885, he began his career at Smith College, becoming Director of the Art School from 1903 to 1923. However, he was there only several days out of each month because of his active painting career and because of an agreement that an assistant would handle the day-to-day duties during the week

In the 1890s, his style changed somewhat, moving from massy, somber tonalities to a lighter coloration. His standard composition became “a patch of meadowland, bounded by groupings of tall, graceful trees with wispy foliage in the middle ground, bathed in the soft, ethereal luminositiy of early spring or fall.” (Lowrey 166) He also worked more in pastels than oils feeling that pastel allowed him more creative possibilities in the creation of beauty.

Tryon was an exponent of the American Aesthetic movement, committed to the importance of cultivating good taste through beautiful art and through familiarity with quality, original works of art. At Smith College, he spearheaded the collecting of fine art from leading painters of the day with whom he associated. He promoted the purchase of work of many Tonalist painters including George Inness and Thomas Dewing

Just before his death in 1925, he bequeathed $100,000. to the College for an art gallery, which was designed in Georgian style by New York architect Frederick Ackerman. The building stood until 1970, when it was demolished to make room for a Fine Arts complex, something he likely would have applauded.