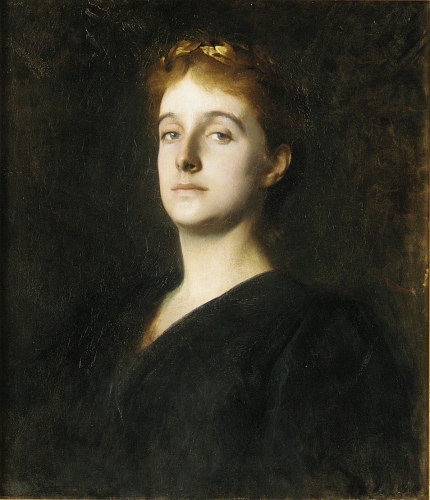 He earned a prestigious reputation on the East Coast during his short life of twenty-nine years. During the decade of his career, he painted 225 pictures, and in 1978, the New Britain Museum of American Art organized the first major Bunker retrospective since one in 1891 shortly after his death at Boston’s St. Bodolph Club.

He was educated in New York and began studying art at age fifteen when he enrolled in the National Academy of Design with Charles Melville Dewey. Later he entered the Art Students League under William Merritt Chase.

He found many landscape painting subjects in Nantucket and Long Island, but in 1882, went to Paris where he studied both at the Ecole des Beaux-Arts with Jean Leon Gerome and at the Academie Julian. He wanted the spectrum of conservative to liberal approaches to art.

Bunker spent much time sketching in Brittany and the Low Countries, and his work of that time was tonalist in style from his exposure to the Barbizon School. The following year, he was elected to the Society of American Artists but had to leave France because he ran out of money.

Bunker got a job teaching at the Cowles Art School in Boston, where he became close friends with collector Isabella Stewart Gardner. Through her, he earned many portrait commissions of prominent people and also learned through friends like Gardner as well as William Dean Howells and other prominent Bostonians that Boston society had a much looser, happier side than he originally perceived.

He was a major influence on many of his students including Lila Cabot Perry, William McGregor Paxton, and Sarah Choate Sears. Artist John Singer Sargent, whom he had met earlier in France introduced him to Impressionism when he spent the summer of 1888 with Sargent and his family in Oxfordshire, England. Sargent was painting in the Impressionist style, having been influenced by his friend, Claude Monet, whom Bunker likely met through Sargent. Although Bunker incorporated Impressionism in his landscape, he continued doing portraits in a realist, traditional style.

In October, 1888, he returned to Boston to find that collectors were not very taken with his new style, but Bunker had a new sense of purpose and resigned from the Cowles School in 1889 to move to New York and become a full-time painter.

Just before that move, he accompanied a friend, Charles Martin to Medfield, Massachusetts for the summer where he painted many rural landscapes and views of the Charles River. When these landscapes were exhibited at the St. Botolph Club in Boston the following winter, many people compared them to Sargent’s work, but sadly these paintings were the last of Bunker’s career. On December 26th, 1890, he caught a cold and died two days later, having been married to Eleanor Hardy for only two months.

His paintings are in many collections including the Museum of Fine Arts and the Isabella Stewart Gardener Museum in Boston.