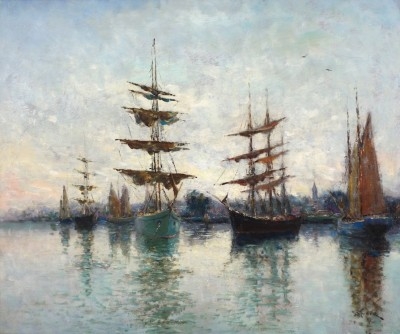 Known primarily as a California landscape painter of pastoral scenes, Dedrick Stuber also painted marine and mountain views. He was born in New York City and studied at the Art Students League and with Julian Onderdonk and Clinton Peters.

In 1920, he moved to California, settling in Los Angeles and exhibiting his work there through 1940. However, he was likely there earlier because a painting titled “Silver Mining” in a private collection was thought to have been done in 1915. He did his “plein air” landscapes at sunrise when it was cool and shady.

He was a member of the Painters and Sculptors of Los Angeles and the Laguna Beach Art Association, and his work is in the Pasadena Art Museum. He died in Los Angeles on August 18, 1954.