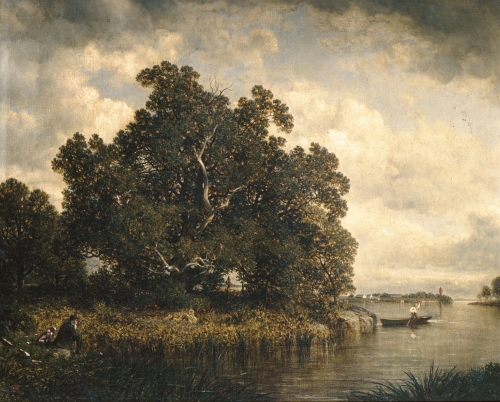 By the end of the nineteenth century David Johnson had gained a reputation as “the best painter of trees in America” and acquired the nickname the “American Rousseau,” in reference to Barbizon School landscape painter Theodore Rousseau. (1) Best known for landscape paintings and his “knowing naturalist eye,” Johnson depicted scenic views in Connecticut, Massachusetts, Maine, New Hampshire, New Jersey, New York, Virginia, and the far West. (2) He also was an accomplished draughtsman and portrait painter.

Johnson was born in New York City in 1827. Despite his claim that he was self-taught, archival records indicate that he registered for two years (1845-1847) at the antique school of the National Academy of Design. He studied briefly with the Hudson River artist Jasper F. Cropsey (1823-1900). He also may have received some instruction from his older brother Joseph Hoffmann Johnson (1821-1890), who painted portraits, and from his study of art books, which he is known to have borrowed from the National Academy of Design’s library.

From the start of his career, Johnson was associated with the second generation of Hudson River artists, and he completed his first dated landscape in 1849 in the company of two prominent Hudson River painters, John F. Kensett (1816-1872) and John W. Casilear (1811-1893). (3) This group of artists is now best known for the development of Luminism, a landscape style characterized by atmospheric light effects, tranquil compositions, and precise renderings of nature.

Johnson experimented with a variety of British, French, and American styles, and he proved adept at developing and altering his style to suit the changing tastes of the time. By the late nineteenth century, Americans had begun to favor and to collect landscapes by French Barbizon painters, including Rousseau and Narcisse Diaz de la Pena. Such patrons preferred general, pastoral scenes to depictions of identifiable American natural landmarks. By adopting Barbizon formats in the 1870s, the versatile Johnson found a “second life” as a painter. He revisited the Hudson River imagery he had painted so meticulously in his early career with a more intimate, free manner.

By 1850, Johnson was exhibiting regularly at the National Academy of Design in New York, where he became an associate in 1860 and a full academician the following year. His works also appeared in exhibitions at other major American art centers, including Chicago, Boston and Philadelphia, and Scenery on the Housatonic was shown at the Paris Salon of 1877. He died in Walden, New York, in 1908. After decades of relative obscurity for Hudson River artists, scholars rediscovered Johnson in 1980s and began documenting his life and work.