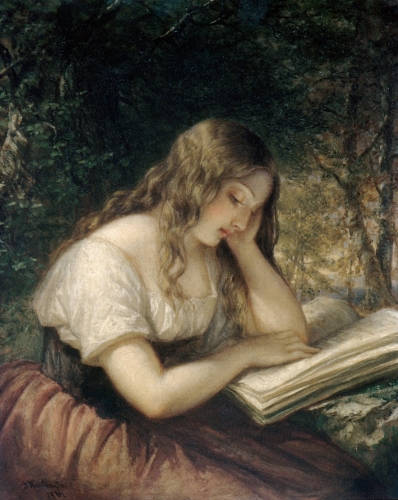 A native New Yorker, Daniel Huntington was very popular during his lifetime for his pious, sentimental portraits, and many public buildings in New York have his portraits. However, 20th century tastes relegated him to near obscurity.

He studied at Yale University and Hamilton College where Charles Loring Elliott painted his portrait and praised his own attempts. In 1836, he attended Samuel Morse’s lectures at New York City and studied with him in his studio.

He enrolled in the National Academy school and did portraits and Hudson River landscape. In 1839, he went to Europe for three years and returned to New York with the goal of bringing historical and allegorical art to America. However, his success was in portrait commissions, which he began in earnest in 1850.

He also spent some time during 1851 to 1858 painting notables in Europe.

Huntington holds the record for being the longest term National Academy President.

Source:
Groce & Wallace, The New York Historical Society’s Dictionary of Artists in America
Peter Hastings Falk, Editor, Who Was Who in American Art