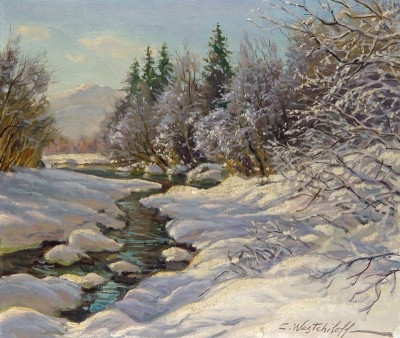 Constantin Alexandrovitch Westchiloff (1877-1945) is an American-Russian artist. He was born in Russia in 1877, and studied at the Academy of Fine Arts in St. Petersburg; as an artist he traveled extensively in Europe and in the USA. He finally settled in New England, where he died in 1945.

He is probably best-known for sea-scapes (particularly of the New England coastline), but was also well regarded for his landscapes, portraits and figures, and genre subjects.

His work, especially after his travels in Europe and then in America, is closest to Impressionist in style. His favored medium was oil, which was well suited to his confident and strong technique. This in turn imbued his paintings of the rugged landscapes and sea-scapes of New England with the drama typical of this area.

Written and submitted, September 2004 by Anthony Capodilupo, who is preparing a catalogue raisonne for this artist.