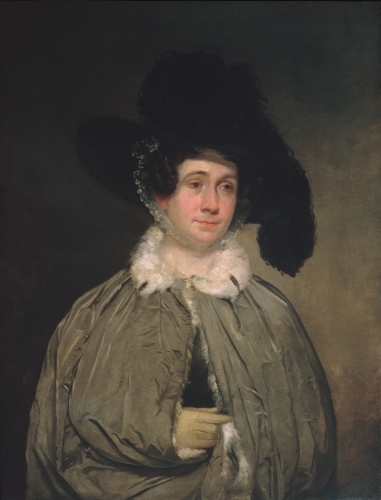 Chester Harding ran a furniture business in upstate New York with his brother Horace in 1815, but by 1817 he had taken up sign painting at Pittsburgh, Pennsylvania, and also made his first attempts at portrait painting. The following year he joined his brother Horace in Paris, Kentucky, and took up portrait painting as a profession, stating in his autobiography, 1866, that during a six-month period there he painted over 100 portraits.

He went to Philadelphia in 1820 but returned to Kentucky after only a very brief period of study. Harding’s talent for portraiture was gaining notice, and over the next year he achieved enormous success.

He was in Cincinnati, Ohio in February, 1820, and then moved to St. Louis where he painted Gov. William Clark. The portrait is in the Missouri Historical Society. He also made a portrait of an Osage Indian Chief.

He then traveled to the countryside where, in June 1820, he painted the only known life portrait of Daniel Boone, which is in the collection of the Massachusetts Historical Society. The portrait was done just before Boone died.

Harding continued to travel after this, painting once again in Kentucky, and also in Cincinnati and Chillicothe, Ohio. He returned to the Eastern seaboard in 1821 or 1822, where he worked in Washington DC, Boston, and Northampton, MA, and achieved such rapid prosperity that by 1823 he was able to travel abroad to England.

During the next three years he was successful in London, painting for the Royal family and receiving numerous requests for other commissions. Eventually, hard times forced him to return to America, where he was again in great demand. He settled in Boston for a few years and founded Harding’s Hall, in which he and an association of artists promoted contemporary art through group exhibitions.

Harding made a second visit to England and Scotland in 1846.

He died in Boston, shortly after his return from St. Louis, where he had painted a portrait of General Sherman.

Source:
Peter Hastings Falk, Editor, Who Was Who in American Art