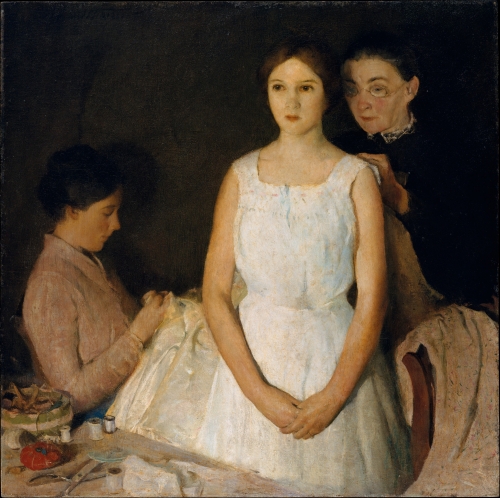 Charles W. Hawthorne (1872-1930) was one of America’s most dynamic, penetrating and forthright portrait painters, as well as a creative, inspiring teacher. A painter’s painter, Hawthorne ran a summer school in Provincetown – the Cape Cod School of Art – for over thirty years and made it a leading artists’ colony of plein-air impressionist-inspired talents. Hawthorne grew up in Richmond, Maine, the son of Joseph Jackson Hawthorne and Cornelia Jane Smith Hawthorne. Having discovered his artistic abilities at an early age, Charles convinced his parents to allow him to study in New York in 1893, at the Art Students League then at the National Academy of Design. His teachers included Frank Vincent DuMond, George de Forest Brush, and William Merritt Chase. During the day, Hawthorne earned his living as a dock worker and he was employed at J. and R. Lamb Studios, a stained glass factory. In 1896, Hawthorne enrolled in Chase’s summer school at Shinnecock Hills. During the following season, he was acting as Chase’s assistant and in New York he helped him organize the Chase School. There he met his future wife, Ethel M. Campbell, the corresponding secretary, and one of Lorado Taft’s students. Hawthorne’s son Joseph, whom Hawthorne depicted as The Fencer (Sheldon Memorial Art Gallery, Lincoln, Nebraska), described how his father lived in a fisherman’s shack at Shinnecock (Hawthorne on Painting, 1938, p. xi).

To Hawthorne’s surprise, Chase abandoned the Chase School without considering Hawthorne’s future. His only consolation was a trip to Europe, which gave Hawthorne an appreciation for the old masters, including Titian, Frans Hals, and Rembrandt. Their classic monumentality was combined with Chase’s robust, painterly Munich School technique to form Hawthorne’s own forceful, sincere style. In Zandvoort, Holland, Hawthorne discovered the Hague School and he visited the Frans Hals Museum. He declared, “When I came here and saw the Hals, I was so overpowered with the brushwork, I couldn’t see anything else.” (Hawthorne to Ethel Marion Campbell, 24 August 1898). 1899 marks Hawthorne’s discovery of Provincetown, still an unspoiled, inexpensive fishing village, an ideal place to start an artists’ colony dedicated to outdoor figure painting. He moved into an old house on Miller Hill, which overlooks the Bay: in 1907 he added a large barn-like building for his school.

For his students Hawthorne posed the model in the brilliant sunlight so that they could concentrate on rendering the effects of light. Hawthorne on Painting (1938) begins with a chapter on the outdoor figure. The figure in sunlight, for the beginner, was a clearly seen silhouette-like object. “The fundamental thing [for Hawthorne was] the mechanics of putting one spot of color next to another.” (Hawthorne on Painting, 1938, p. 23). Advising students to avoid detail, Hawthorne wanted them to capture the model’s basic forms, using a limited range of values. The figure was not to be conceived as a softly modeled form, as were the traditional, academic engravings of sculpture with their full range of values, the method that was taught in the European academies for centuries. Like Claude Monet, Hawthorne told his students to avoid drawing, while putting down spots of color. “Let color make form — do not make form and color it” (Hawthorne on Painting, 1938, p. 26). Students were further advised to paint with a palette knife, or with a broad brush; since they were young and free, he wanted them to paint freely. Ideally, students would convey “the thrill of seeing the thing for the first time” (p. 29). Most of all, Hawthorne encouraged students to be bold, even to be a bit brutal. Practically like a Fauve, Hawthorne insisted: “Go out like a savage, as if paint had just been invented.” (p. 26). At the weekly Saturday morning critiques, students who successfully rendered the model in a broad manner by juxtaposing interesting areas of color were praised. Those who attempted to be decorative, those who approached the subject timidly, were criticized. The authoritative and imposing Hawthorne was described as intimidating by many a “weak-kneed” pupil (Seckler, 1977, p. 23).

In 1903, Hawthorne married Ethel, and he began collecting impressive awards with the National Academy’s First Hallgarten Prize in 1904 for Girl in Green. Then came the Second Hallgarten Prize in 1906, a silver medal at the Buenos Aires Exposition in 1910, and in the following year he was elected a full academician and was awarded the NAD’s Clarke Prize for The Trousseau (Metropolitan Museum of Art). Hawthorne won the First Altman Prize and Isidore Gold Medal from the National Academy for The Offering, a modern version of the Madonna and Child with Hawthorne’s favorite accessory — a platter of recently caught fish from P-Town’s docks. Throughout his life, Hawthorne was winning prizes, too numerous to list here (at least twenty more followed). Hawthorne’s biography is fairly uneventful, apart from a trip to Italy in 1906 and another to Spain and France toward the end of his life; he stayed in Provincetown until his death in 1930. In 1909, Hawthorne was appointed to take over Robert Henri’s classes at the New York School of Art.

In Provincetown Hawthorne resisted the onslaught of modernists and the “invasion” from Greenwich Village. This bohemian circle included journalist and novelist Hutchins Hapgood, George Cram Cook and his wife Susan Glaspell, Mabel Dodge, John Reed, William Zorach, and Eugene O’Neill. The rebels who went there in 1915 had lost their idealism. Hapgood (1939, p. 391) explained, “All existing theories had been shown to be impotent,” upon the realization that a terrible war was inevitable. Then O’Neill entered the scene, just then “coming out of a season-long drinking binge” (Watson, 1991, p. 219). His play Bound East for Cardiff opened on July 28, 1916. It was a wild party thrown by those disillusioned crusaders and anti-establishment artists, sexually liberated couples, such as O’Neill and Louise Bryant, artists promenading in Cubist costumes, nude bathing parties, and what Hapgood characterized as a general spirit of suspicion and ill-will, a “certain instinct to destroy each other’s personalities.”

Although opposed to these avant-garde “antics,” Hawthorne took part in the Beachcombers, a low-brow but charity-oriented artists’ club, restricted to men, who met in a fish house called the Hulk. Yet when it came to aesthetics, Hawthorne stuck vigorously to his realist guns — he had control of the Provincetown Art Association, and “virtually banned the modernists from exhibiting there,” except for E. Ambrose Webster’s faction (Jacobs, 1985, p. 178). Webster, Hawthorne’s rival, had opened a school in 1900. At that time, his bright impressionist style and Fauve palette were shockingly progressive. Webster was considered a modernist: he exhibited at the Armory Show, studied under Gleizes in Paris in the early 1920s, and ended up in league with Demuth, Zorach, and Karl Knaths in the Provincetown Group Show in 1930. Still, he remained a representational artist and he and Hawthorne continued to be friendly rivals. In 1915, Hawthorne painted The Crew of the Philomena Manta (Town Hall, Provincetown), perhaps his masterpiece, which features a robust group of Portuguese fishermen hauling in the day’s catch. Around the same time, his student Edwin Dickinson (1891-1978) was executing his dynamic Interior (Private collection). Hawthorne died before abstract painter Hans Hofmann established his own Provincetown school. Ironically, the latter occupied Hawthorne’s house and studio beginning in 1935.

Critics admired Hawthorne’s technique and the sense of life that his paintings embodied. Anna Seaton-Schmidt (1913, p. 824) appreciated the way in which his portraits conveyed universal images of humanity. At the same time, the Portuguese fishing folk, often used as Hawthorne’s sitters, are superb portraits that reveal the sitter’s inner spiritual essence: “the poetry that underlies all human life.” A few years later, Duncan Phillips (1917, p. xx) equally stressed Hawthorne’s “sympathetic insight into character,” but pointed out some of his faults: waxy flesh tones, a lack of contrasting textures, and simplistic modeling. A few critics, for instance, Henry McBride, had no appreciation at all for Hawthorne’s works. Phillips, however (1917, p. xxiv), could forecast a bright future for Hawthorne: “He is a young man of the adventurous breed, and new developments may be confidently expected.” Leila Mechlin (1931) had the advantage of working with Hawthorne’s entire oeuvre. She stressed his contributions as a teacher:

Hawthorne encouraged virility and urged upon his students the importance of direct expression — taught them to differentiate between color and tone and to re-create the illusion of light without employing the impressionists’ formula. In this sense he was a modernist, but he was never willing to go the length (p. 96). The “spiritual quality, this insight into character” and his imagination placed Hawthorne “on a higher level that the majority” of painters” (p. 102).

What makes Hawthorne’s portraits so strong and compelling is the conveying of character and personality, combined with the classical grandeur associated with Italian art, and an engaging Yankee realism, partly inspired by Thomas Eakins. The sitters are often shown frontally and they make direct eye contact with the viewer. Certain group portraits recall those of the Dutch masters, while others, such as Three Women of Provincetown (ca. 1924; Mead Art Museum, Amherst College) have a primitive isocephalism and a collective sanctimonious primness that seem to have inspired Grant Wood’s Daughters of Revolution, painted six years later. For Annette Stott (1998, pp. 74-76), this painting resembles The Regentesses of the Old Men’s Almshouse by Frans Hals, which Hawthorne had mentioned specifically (Hawthorne to Ethel Marion Campbell, 29 June 1898).

Although Hawthorne advised students to treat the figure as a still-life element, he rarely did this in his own works. His figures are far from lifeless objects set into a formalist scheme. In stressing direct observation of nature over learning from the old masters, Hawthorne placed personal creativity at the highest rank. Perhaps he assumed that once students mastered the basic skills, they would perfect their art by analyzing and experiencing Rembrandt, Titian, Leonardo, and Giorgione — those painters who exercised such a profound influence on his art, beyond technique. Like many American impressionists, Hawthorne took only the elements from the impressionist aesthetic that he wanted. One of America’s greatest artists, Hawthorne was acknowledged by another great teacher, Hans Hofmann (in Hawthorne on Painting, 1938, p. viii), as a “robust and provocative” painter with “an abundant, vigorous mind, of a cataclysmic temperament.” Hofmann saw Hawthorne as an American individualist, in the tradition of Whistler and Ryder. Add to this Renaissance monumentality a heavy dose of Chase’s dashing technique, an almost Ash Can preoccupation with finding beauty in the ordinary, the ugly, and the commonplace, and an inflexible aspiration toward creative originality, and you will have defined Hawthorne’s art.