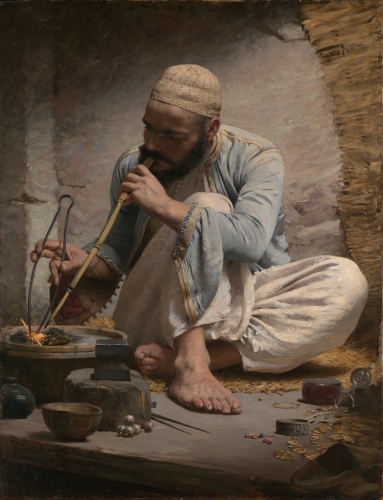 Charles Pearce was a painter best known for his portraits and genre scenes. In 1851, Pearce was born in Boston and named after his grandfather, a poet. He embarked upon a career as a painter and in 1873, with the advice of William Morris Hunt, an early American impressionist, moved to Paris to study at the Leon Bonnat School.

At the Leon Bonnat School, he studied with fellow student, John Singer Sargent, and soon became a member of an artist’s circle consisting of other expatriates including Chester Loomis, Edwin Blashfield, and Milne Ramsey.

Pearce’s sentimental interpretation of rural life in Northern France was allied in style and subject matter to the French academic peasant painters. His subjects were often exotic versions of the craftsman genre themes popularized in the United States during the 1880s and 1890s by such artists as Edgar Melville Ward and Jefferson David Chalfant.

Pearce remained an expatriate, settling his studio 20 miles outside of Paris in Auverssur-Oise in 1885.

He later worked on many international art juries and towards the end of his career, contributed a series of six lunette murals to the decoration of the Library of Congress.