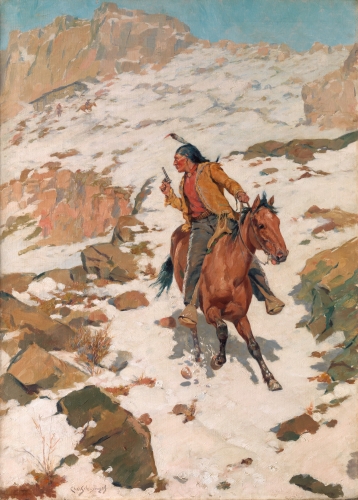 One of the better known painters of Western subject matter, Charles Schreyvogel was especially interested in military life in the days of the disappearing frontier. His western scenes were usually subjects with landscape as the backdrop, and his depictions of Indians were that of people with dignity and pride. “His favorite theme was warfare between intruding whites and Indians defending their ancestral homelands.” (Baigell, 321)

He spent most of his life as an impoverished artist and then earned what seemed like overnight fame. “When Remington died in 1909, Schreyvogel wore the mantle of premier Western artist for the brief remainder of his life.” (Zellman, 557)

Schreyvogel was born in New York City and grew up in a poor family of German immigrant shopkeepers on the Lower East Side and also spent much of his childhood in Hoboken, New Jersey. He found work in art-related trades including as a Meerschaum pipe carver, goldsmith, and lithographer.

He taught himself to draw, but he studied with H. August Schwabe at the Newark Art League. By 1880, he was teaching drawing and painting and used the roof of his apartment in Hoboken as his studio. In 1887, with the help of several patrons, especially Dr. William Redwood Fisher, he went to Munich, Germany for three years and studied with Carl Von Marr and Frank Kirchbach. Dr. Fisher encouraged the artist to take an interest in western subject matter.

Returning to the United States, he had bad health and was advised to go West to regain strength, but he didn’t have the money for several years so he satisfied his aroused interest by sketching cowboys and Indians he saw in Buffalo Bill’s Wild West Show.

In 1893, Schreyvogel first went West, visiting Arizona and the Ute Reservation in southwest Colorado. He quickly regained his health and excelled as a horseman. He also learned sign language to communicate with the Indians to persuade them to pose for him. But the resulting paintings didn’t sell in the East, so he, having married Louise Walther, earned money with portrait painting of miniatures on ivory while continuing to do western painting.

In the 1890s and 1900s, he made additional trips West, including the Blackfeet Reservation in Montana. In 1901, his work, My Bunkie, won the first place honor, the Thomas B. Clarke Prize, at the National Academy of Design, and a market for his western paintings and sculpture was set. My Bunkie was a rejected painting that even his local cafe owner had refused to hang, and despairing, he had left it at the Academy. He was so sure he would get no recognition that he had not even bothered to leave his address.

He worked from studios in Hoboken, New Jersey, and from a farm in West Kill, New York, and his Academy success was followed by winning a bronze medal in Paris and another at the Pan-American Exposition in Buffalo.

The money he earned from this recognition allowed him to do more traveling in the West where he gathered material for his studio painting, many of them military scenes. Most of his canvases were large, but he was such a meticulous painter that he only completed about seventy-five western paintings. He also did some watercolors, and many of his paintings were reproduced during his lifetime.

He died in Hoboken from blood poisoning from a chicken bone lodged in his gum. His studio and collection are on permanent display at the Cowboy Hall of Fame in Oklahoma City.