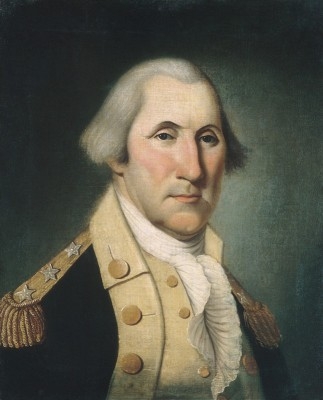 Born in Annapolis, Maryland, Charles Peale Polk was orphaned at age ten and grew up in Philadelphia with his prominent artist uncle, Charles Willson Peale. He learned to paint from him. From 1787 to 1818, he tried to earn a living as a portrait artist and commercial sign painter, moving back and forth between Philadelphia and Baltimore.

His specialty became portraits of Revolutionary heroes such as George Washington, General Lafayette and Benjamin Franklin, and he made many copies of these originals, which he offered for sale. The copies he made of Washington, over 50, were from an original done from life by Charles Willson Peale.

His most famous work was his Portrait of Thomas Jefferson, painted at Monticello in 1799, and he stayed in Virginia about a year, working in Richmond and Winchester in addition to Monticello.

Unable to support himself as an artist, he accepted a government clerkship in Washington DC in 1818. He continued to paint, changing from oils to “verre eglomise,” painting on glass.

Source:
Peter Hastings Falk, Editor, Who Was Who in American Art