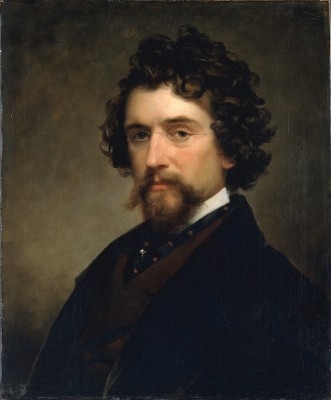 Born in Scipio, New York, Charles Loring Elliott became one of the leading mid-19th century portrait painters, known for strong, un-embellished work that focused only on the personality and character of the sitter. It was said that his style was perfect for his time when society admired the self-made man.

As a youth, he was discouraged by his architect father from studying art, so he worked in a store until his father relented and sent him to New York to study with portraitists John Quidor and John Trumbull.

Lacking early success, he did some illustration and then spent ten years sharpening his skills as an itinerant portrait painter throughout the Northeast. In 1839, he opened a studio in New York City and achieved immediate acceptance, painting portraits of many persons of political, academic, literary, and fine art prominence. His subjects included William Cullen Bryant, Henry Wadsworth Longfellow, Cyrus McCormick, and James Fenimore Cooper.

Major influences on his work during this period was portraitist Henry Inman whom he met in 1844 and also the new art of photography whose realism he strove to depict in his portraits.

After Inman’s death in 1846, Elliott was the most prominent portrait painter in New York. In 1847, he was made a full Academician of the National Academy of Design, where he exhibited frequently. He died in Albany, New York.

Source:
David Dearinger, Editor, Paintings and Sculpture in the Collection of the National Academy of Design, Volume One, 1826-1925