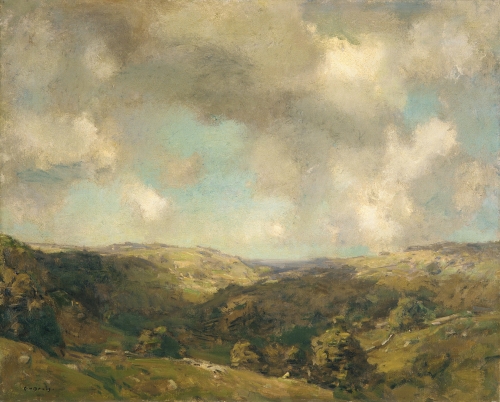 Born in Amesbury, Massachusetts, Charles Davis became one of the more recognized of the Tonalist and Impressionist painters in America. He was also the leading member of the colony of artists who gathered at Mystic, Connecticut. His early landscapes that gave him the reputation for Tonalism and that resulted from his visit to Barbizon, France, depicted every hour from dawn to sunset with a subtlety of form and color. However, in the mid 1890s, his style changed dramatically to Impressionism.

Davis did not set out to be an artist, and he had early employment in a carriage factory. However, after attending an exhibition featuring works by Jean Francois Millet, French Barbizon-School painter, he, with the encouragement of his father, enrolled in 1877 in the newly founded school at the Boston Museum of Fine Arts. His teacher was Otto Grundman.

In 1880, a local businessman who was highly impressed with the talents of Davis gave him a thousand dollars to study in France. He enrolled at the Academie Julian with Jules Lefebvre and Gustave Boulanger but lived for ten years near Barbizon where he was much influenced by that style of landscape painting. He married a French woman, Angele Legarde, and also exhibited at the Paris Salon.

Meanwhile, he sent works home and had one-man exhibitions regularly at Doll and Richards Gallery in Boston. In 1891, he returned to the United States and settled in Mystic, Connecticut where the local area provided him with many rural subjects for his painting, which emphasized the quiet aspects of nature. He started the Mystic Art Colony in 1892, and shortly after that, critics began to notice a change in his style that was becoming increasingly Impressionistic. He became especially noted for cloudscapes with brilliant blues, and cumulous clouds “and vivid color contrasts that endowed the scene with the characteristic Impressionist sense of the momentary.” (Gerdts 229)

After the death of his first wife, he married Francis Darby, one of his students, who exhibited regularly at Mystic and also wrote reviews of the local art exhibitions.

Davis exhibited at the Chicago Art Institute, the National Academy of Design in New York, the Armory Show of 1913, and the Pan-Pacific Exposition in 1915. He won a silver medal at the Universal Exposition of 1889 in Paris.

He died at the age of 77 and willed his library of more than eight-hundred art reference books to the public library in Westerly, Rhode Island, the closest major library to Mystic.