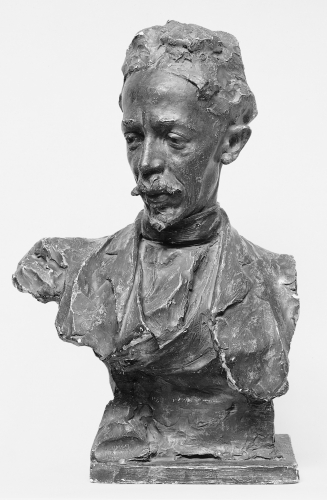 A native of Philadelphia, Charles Grafly has been called the “foremost American sculptor of male portrait busts.” (Reynolds, 146). It has also been written that “Most important of all, . . .he sought to find the true person within, which was even more elusive.” (Reynolds, 178).

Grafly also did life-size figures including ones for the Philadelphia “Smith Monument”, a tribute to Civil War soldiers. However, early in his career, he focused on idealistic and allegorical subjects. In the Paris Exposition of 1900, he won a Gold Medal for the Vulture of War, and for the Pan American Exposition of 1901, he did the Fountain of Men, an allegorical depiction representing the five senses. For the Custom’s House in New York, he did a series of personification figures of France and England, but upon completion of that project in 1905, he switched to his signature portraiture.

Grafly was known for his analysis of the personalities of his subjects, and he strove to convey their true presence so that nothing interfered with the viewer’s interaction with the portrait. It is said that he sketched every day, and he recounted to his daughter that when he and Robert Henri went to France together, they started the day by using each other as sketch subjects.

He spent most of his life in Philadelphia excepting regular summer vacations to Gloucester, Massachusetts. He began his career by apprenticing in Struther’s stone monumentshop where he carved many bits of sculpture for Philadelphia City Hall. In 1884, he enrolled in the Pennsylvania Academy, and studied anatomy with Thomas Eakins and Thomas Anshutz.

In 1888, Grafly went to Paris to the Julian Academy and the Ecole des Beaux Arts. For many years, he taught at the Pennsylvania Academy and at Drexel Institute. He was a founder of the National Sculpture Society and became noted for his portrait busts.