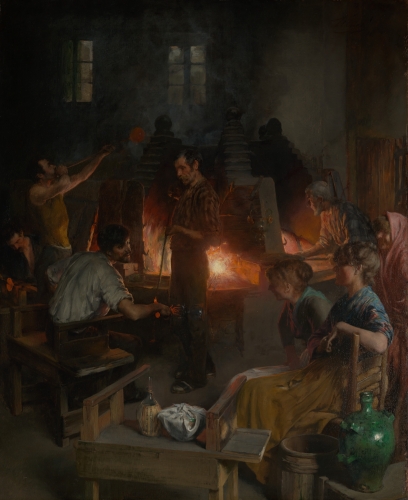 He worked in the Netherlands ca. 1890 and attended the Royal Academy in Munich, Germany, as did William Merritt Chase, who like him, was influenced by Dutch Golden Age painting. He was discovered by Thomas B. Clarke, a lace and linen manufacturer in New York who became a collector of contemporary American art. Ulrich painted his portrait in gratitude after his painting In the Land of Promise, Castle Garden was shown at the National Academy of Design, where it won the National Academy’s first Thomas B. Clarke Prize for Best American Figure Composition.Death place: Berlin, Germany

Charles Ulrich’s work shows some influence of the Munich school, but with a more precise handling of form, and his appreciation for the Dutch masters is apparent in his use of dark, rich colors and the detail he renders in costumes and still lifes. He favored working class scenes. Ulrich lived abroad from the late 1880s, returning to NYC for visits.