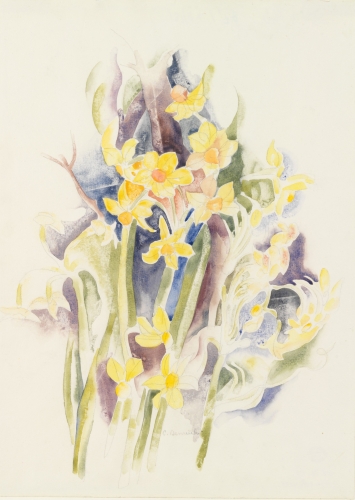 Charles Demuth was born on November 8, 1883 in Lancaster, Pennsylvania to a prosperous family in the tobacco business, who encouraged his artistic pursuits. His father Ferdinand was an amateur photographer, and his grandmother and aunt were amateur flower painters. His mother cultivated a lush Victorian garden, and flowers would fascinate Demuth endlessly.

Demuth studied at the School of Industrial Art in Philadelphia from 1903 to 1905. In 1904 he made a brief sojourn to Paris, living the bohemian life and breathing French Modernism. In 1905 Demuth enrolled in the Pennsylvania Academy of the Fine Arts where he was the pupil of Thomas Anshutz, Hugh Breckenridge, and Henry McCarter. He was friendly with Charles Sheeler and Arthur Carles, and formed a lifelong friendship with William Carlos Williams. In the fall of 1907, on his second trip to Paris, Demuth made the acquaintance of Henri Matisse, Georges Braque, André Derain, Raoul Dufy and Maurice de Vlaminck–all aesthetes of the Fauve principles. Demuth returned to the States in 1908 where he re-enrolled at the Pennsylvania Academy and finished his studies in 1910.

Back at his family home in Lancaster, Demuth focused on still lifes and figurative studies reflecting the influence of Matisse and the Fauves. In 1912 on his third visit to Europe, at the height of the Cubist revolution, Demuth studied at the Academies Colarossi and Julian interspersed with trips to London and Berlin. He was introduced to Leo and Gertrude Stein and began to frequent their salon where he met Pablo Picasso, Juan Gris, Robert Delaunay, Francis Picabia and Marcel Duchamp. Demuth flourished in this milieu and thoroughly immersed himself in the work of Cézanne.

Upon his return to the United States in 1914, Demuth alternated between Lancaster, Provincetown on Cape Cod, a summer colony of artists and writers, and New York City. For several months at the end of 1915 he lived in New York’s Greenwich Village. He metamorphosed from a traditional painter to a progressive painter. He attended the Arensberg salon frequented by Duchamp and Charles Sheeler whenever he stayed in New York and took part in Dada ideology. Marsden Hartley, with whom he shared common interests, introduced him to Alfred Stieglitz, but Stieglitz refused to carry anyone whose work competed with John Marin’s watercolors. Demuth frequented “291,” Stieglitz’s gallery, to familiarize himself with the American vanguard. The Daniel Gallery in New York sponsored him until he joined Stieglitz’s stable in 1917.

In the winter of 1916-1917 Demuth visited Bermuda with Hartley where he produced watercolors which vibrated like a “living nerve,” and inspired by Albert Gleizes, who was there at the time, he began to demonstrate architechtonic structure, laying a foundation for Cubist-Realism, or Precisionism, an adaptation of Cubism. Demuth began to introduce industrial imagery onto his canvases. Such works were his main concern until the early 1920s, when he painted still lifes in homage to Cézanne. Demuth made another trip to Paris in 1921 revisiting his art theories, and in homage to Gertrude Stein, presented her a gift of a small landscape.

Most of Demuth’s work was painted in Lancaster, which provided him with his varied subject matter–vaudeville, acrobats, café and bar scenes, as well as illustrating stories and plays for his private pleasure–side-by-side with his elegant and airy flower watercolors.

Frail his entire life, Demuth died of diabetes at the age of fifty-two in 1935. He left behind a body of more than nine-hundred works, some very powerful and some extremely delicate, but all infused with a highly personal response to Modernism.