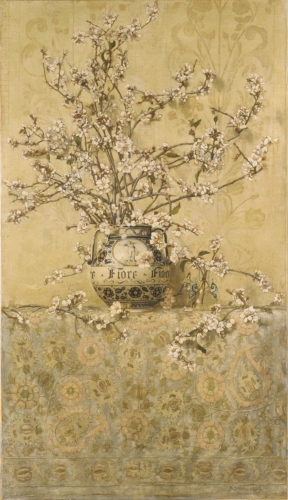 Although he spent most of his life in Italy as an expatriate artist, Charles Caryl Coleman exhibited in the United States and England and was claimed proudly by his birthplace of Buffalo, New York as a native son.

Early in his career he executed a number of portraits and figure paintings and later specialized in landscape and architectural subjects. Many of his commissions were from Buffalo residents such as the decorative panel monumental still life he painted for a prominent Buffalo woman.

Coleman was born in 1840 in Buffalo, New York. He studied art there under William H. Beard and an itinerant painter, Andrew Andrews whose real name was Isaacs.

Coleman then spent the years 1859 to 1862 in Paris as a student of Thomas Couture. He returned to the United States to serve in the Union Army during the Civil War, in which he was seriously wounded. He spent time in New York City, and in 1866, Coleman returned to Europe with fellow painters William Morris Hunt and Elihu Vedder.

He spent time in Paris and Brittany before moving to Rome, where he lived in the apartment that had been occupied by poet John Keats. Eventually Coleman settled in Capri, near Naples where he remained for the rest of his life.

Among his early work is a study of his friend Vedder in Colemans studio. Coleman was also commissioned to do a portrait of poet and essayist Walter Savage Landor. He is perhaps better known, however, for his architectural paintings, such as The Bronze Horses of San Marco, Venice (1876, Whitney Museum of American Art).

One of Coleman’s favorite subjects was Mount Vesuvius, which was visible from his villa on the island of Capri; Coleman portrayed the volcano’s disturbances and their effect on the landscape and the Bay of Naples with great fidelity. His treatments of this view include Vesuvius from Pompeii (date unknown, Detroit Institute of Arts) and The Vesuvius Eruption of 1906 (date unknown, Brooklyn Museum).

Coleman worked not only in oils but also in watercolor and pastels. While he did not execute many still life, his floral paintings were recognized for their skillful composition and use of color. He died in 1928 in Capri.