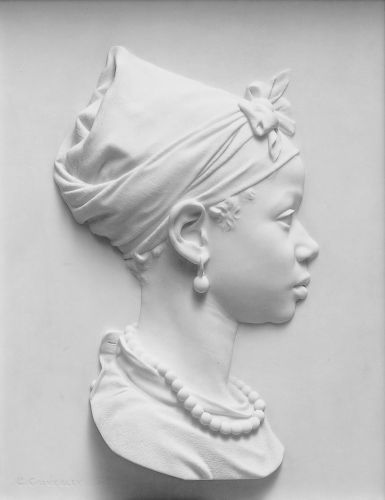 Charles Calverley was born in Albany in 1833 and, at the age of thirteen, he apprenticed to local stonecutter John Dixon. In 1853, Calverley’s work in Dixon’s shop caught the attention of Erastus Dow Palmer. After seeing a rose carved by the twenty-year old, the sculptor bought out the remainder of Caverley’s apprenticeship and brought him to work in his own studio.

In 1868, Calverley left Palmer’s employ and opened a studio in New York City in 1869, where he carved a bust of Abraham Lincoln that gained wide attention. He was inducted as a member of the National Academy of Design in 1874 and gained renown for his medallions and bas-reliefs of notable Americans, including George Washington.

He exhibited busts and medallions at the National Academy of Design throughout the 1870s and in the early 1900s; at the Brooklyn Art Association during the early 1870s; at the Centennial Exposition in Philadelphia in 1876; and at the National Sculpture Society in 1895.