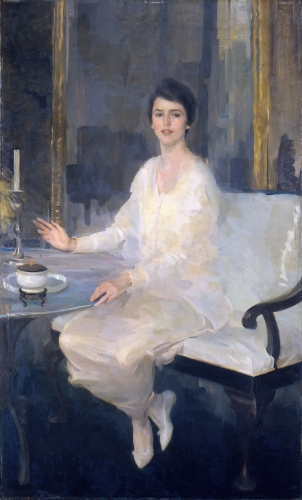 Considered by many to be the finest woman painter active in America at the turn of the century, Cecilia Beaux was not only technically masterful in her rich, vigorous manipulation of paint and her subtle orchestration of color, but also a keen observer and an innovative designer. By 1902, Beaux was recognized as one of the top portrait painters in America.

However, some critics including James M. Keny have observed that her work after 1900 became increasingly more superficial despite her extraordinary technical facility. By the time she had gained virtually universal recognition as one of America’s leading portrait painters in the teens and early twenties, Keny observed that much of her early edge of superiority in conveying the mood of her subject had eroded.

Beaux was one of the early female artists in America to become highly respected for her artistic achievements and is associated in name recognition, subject, and quality of painting with Mary Cassatt and John Singer Sargent. Early in her career, she made a commitment not to marry so she could dedicate herself to her artistic talents. For portraiture, she earned a reputation for skillfully conveying the character and personality of her subjects.

Beaux’s primary subjects were upper class women and children as well as portraits of leading political figures including Theodore Roosevelt, Henry James, and Georges Clemenceau. Indicative of her popularity was her selection by Mrs. Theodore Roosevelt to paint a portrait of her and her daughter while they were residents in the White House.

At the age of sixteen, Beaux studied drawing under Catherine Drinker, an historical and religious painter whose brother later married Beaux’s sister. In 1872 or 1873, she took instruction from Adolf Van der Whalen, a Dutch artist active in Philadelphia. Between 1881 and 1883, Beaux studied semi-privately in a friend’s studio with William Sartain.

Her Quaker uncle, William Biddle, seeing her apparent early art talent, paid for her education including the private studio drawing lessons from William Sartain (1843-1924). Biddle allowed his niece to look at paintings at the Pennsylvania Academy but not study there with Thomas Eakins “on moral grounds.” However, enrollment records show she did manage to take classes at the Academy, something she later denied in her autobiography, Background With Figures, published in 1930.

She gave private art lessons and in 1885 went to Paris to study at the Academie Julian. This trip was the first of seven visits she made to France, where the emerging Impressionist style much influenced her, causing her to drop darker tones for a more vibrant, fluent style with brighter, livlier colors. She also studied at the Colarossi Academie under William Bouguereau, Pascal Dagnan-Bouveret, and Gustave Courtois, as well as privately with Benjamin Constant.

In Philadelphia from 1895 to 1915, she had an appointment at the Pennsylvania Academy of the Fine Arts, the first woman teacher to be hired in a full-time position. She also spent much time in New York City and was close friends with William Merritt Chase, Abbott Thayer, and Childe Hassam. She was awarded full membership in the male-dominated National Academy.