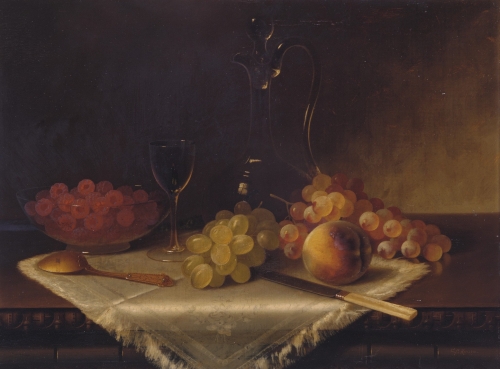 Born in Lancaster, Ohio, Carducius Ream lived in New York and Cincinnati before settling in Chicago (1878) where he became that city’s most famous still-life painter, known especially for his depictions of fruit. Typically his work featured table-top studies of fruit placed near or in a china dish or glass. He also painted fruit on the vine or freshly picked from the tree. In addition to fruit still lifes he painted landscapes, figures, and portraits.

Ream began to paint early in his career, and his work was exhibited at the Royal Academy of Art in London. Ream studied abroad in London, Paris, and Munich as well as in New York. His painting “Just Gathered” was the first picture by a Chicago artist to be included in the permanent collection of the Art Institute.

He enjoyed a prosperous career during his lifetime and exhibited at renowned venues such as the Brooklyn Art Association (1872-1879), the Royal Academy London (1892, 1898); and the Art Institute of Chicago (1894-1909, 1909 solo show, 1910-1917). Ream’s fruit pictures were reproduced as chromolithographs by Louis Prang & Company and advertised as “dining-room pictures”.

He was the elder brother of Morston Ream who was also a prominent still life painter.

Source:
Peter Falk, “Who Was Who in American Art”