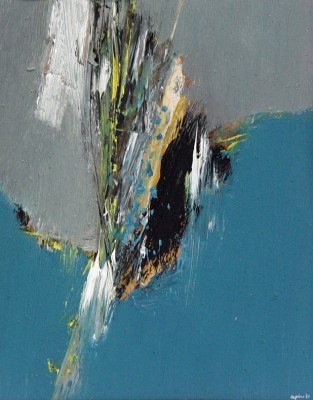 “My paintings and sculptures, at first glance, may appear to be purely aesthetic; closer up, they are not. They hold a feeling of tentativeness, combined with a sense of arrival.” — Budd Hopkins.

Budd Hopkins established an international reputation as an artist and sculptor. He has exhibited in England, Finland, Italy and Switzerland.

His work has been on display in many of the most prestigious art galleries and museums, not only in the United States but in Europe as well. He has won wide acclaim in the field of abstract art.

He also has been recognized for his research into the matter of UFOs and one of his books, “The Intruders”, printed by Random House, was on the New York Times best-seller list and was the basis for a television show on CBS.

Born in 1931, he was a graduate of Linsly Military Institute (now Linsly School) in 1949 and Oberlin College in 1953. He first displayed artistic abilities when, as a child recovering from a long-term illness, he began to create sculptures of ships made out of modeling clay. But it wasn’t until he arrived at Oberlin that he made a serious study of art.

He settled in New York after obtaining his degree. He and his wife, April Kingsley, and their daughter, Grace, divided their time between their home at Cape Cod, Mass., and that in New York City.

In 1963, Hopkins was selected by the Columbia Broadcasting System as one of the 15 painters featured in the network’s first television special on American art. In 1958, Art News picked him as one of 12 Americans for exhibition in Spoleto, Italy, in the “Festival of Two Worlds.”

His brilliance has won him a humber of fellowships and awards. In 1972, the West Virginia Arts and Humanities Council awarded him its Commission Prize. In 1976, he received the John Simon Guggenheim Fellowship for Painting and in ’79 he received a fellowship from the National Endowment of the Arts. He also won a special project grant from the New York State Council on the Arts in 1982.

Hopkins’ work has appeared in many exhibitions across the country and he is represented in many important private and corporate collections around the nation.

His art has been featured in the Metropolitan Museum of Art, Museum of Modern Art, Bronx Museum of Art, Brooklyn Museum, Whitney Museum, Corcoran Gallery, Guggenheim Museum, Queens Museum in New York, and the Public Library of New York.

Across the United States, it has been seen in the Smithsonian Institution and the Library Congress in Washington, D. C.; the Philadelphia Museum of Art, the Houston Museum of Fine Arts, and the San Francisco Museum, among others.

Biography partially from from the Archives of AskART and The Wheeling, West Virginia Hall of Fame