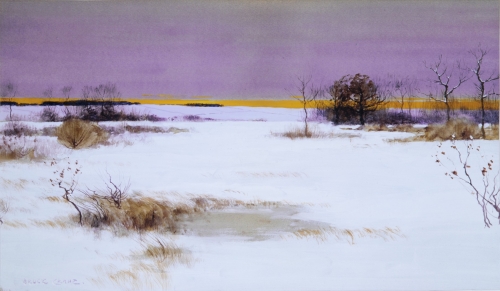 A popular landscape painter, especially of golden toned landscapes that conveyed fall and winter seasons, Bruce Crane, also a teacher, was strongly influenced by the French Barbizon school of painting and had a studio for many years in Old Lyme, Connecticut. He also painted on Long Island, the Catskills, and the Adirondacks. In 1882, he was in France at the colony at Grez-sur-Loring with Birge Harrison, Kenyon Cox, and Alexander Wyant, but he maintained a studio in New York City until he moved to Bronxville in 1914.

He took early art lessons from Alexander Wyant in New York City and then studied in Europe. He became a member of the National Academy of Design, the American Water Color Society, the Salmagundi Club, the Society of American Artists, and the Grand Central Art Galleries. One of his great admirers was J. Francis Murphy with whom his work has often been compared.