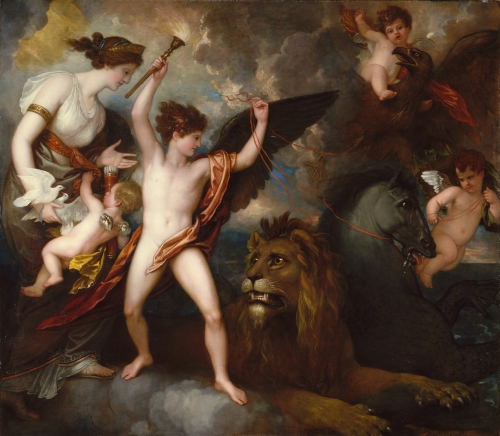 The Power of Love in the Three Elements, 1809

America’s most famous successful expatriate painter and described as the “father of American painting” (Zellman, 55) Benjamin West became the first American artist to gain international fame. He was known for his large-scale and realistic historical genre paintings.

West was born near Springfield, Pennsylvania, near the future location of Swathmore College. Supposedly, he first learned pigment making from local Indians. William Williams, an English portrait painter living in Philadelphia, was probably his first teacher.

West’s father was an innkeeper, and as a youngster, West began sketching many of the people who passed through his home. As a teenager, he was painting portraits in Lancaster, Pennsylvania, and by age 20, had finished his first history painting, The Death of Socrates.

Sensing his exceptional talent, a group of local persons raised money to send him abroad with the goal of making him America’s first professional painter.

From 1760 to 1763, West traveled in Italy, becoming imbued with classical taste. He aroused much public attention and surprise among those who had expected the American to look like a savage and found instead, a cultured-seeming gentleman. In Italy, he painted scenes from the classics and the Bible.

In 1763, he set up as a portrait painter in London, and from that time lived abroad. He was regarded as an American exotic, a role he cultivated. During his residency in London, he influenced a generation of American painters including Gilbert Stuart, Thomas Sully and Rembrandt Peale. He also became a confidante and official historical painter to King George III, a unique position during the American Revolution.

In 1771, West revolutionized history painting with his Death of General Wolfe, showing soldiers in the Battle of Quebec in actual dress, a break from the prescribed classical garb of traditional painting.

In 1772, he was instrumental in the establishment of the Royal Academy of Arts in London and later became its President.