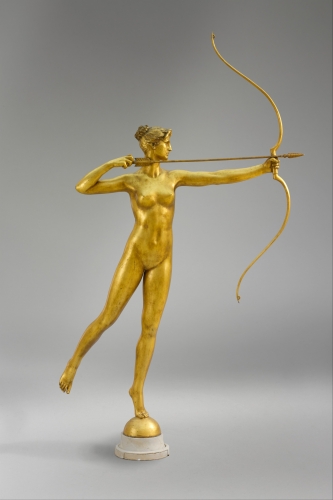 Born in Dublin, Ireland, Augustus Saint-Gaudens became one of the more famous American sculptors of the late 19th century and was associated with a period called The Gilded Age. He brought the Beaux Arts style to America, as he had studied in Italy and France, where he had had rigorous training which included model classical subjects from plaster casts. A work for which he is particularly known is the monumental statue “Diana,” a gilded copper weathervane for the top of the Madison Square Garden Tower in New York City. Thirteen feet high, it was installed in 1894.

He came to New York City as an infant and his father became a shoemaker. At age thirteen, Augustus apprenticed to a cameo cutter and then studied art at Cooper Union and the National Academy of Design where he drew from antique casts and worked in clay. In 1867, he enrolled for three years in the Ecole des Beaux Arts in Paris and supported himself by making cameos and copies of famous sculpture.

At the beginning of the Franco-Prussian War, he went to Italy for five years and found work of Donatello, Florentine master, especially inspiring. In Rome, he established himself as a professional sculptor, receiving many commissions for portraits busts.

In 1875, he returned to New York and worked for Tiffany Studios and became part of a team of artists who did decoration in Boston for Trinity Church, designed by H.H. Richardson. Augustus’ first major commission was the Farragut Monument for which Stanford White designed the base. Admiral David Farragut was the first of many Civil War figures that he depicted, and Augustus’ reputation for portrait and public monumental sculpture made him one of the prominent figures of his day. Another one of his famous Civil War creations was the New York City “Sherman Monument”, depicting William Tecumseh Sherman on his march through Georgia. According to Donald Martin Reynolds in his book, “Masters of American Sculpture”, the work “is America’s most successful equestrian monument from the standpoint of conception, design, and execution”…(133).

In New York Society, he was closely associated with architect Stanford White and Richard Watson Gilder, editor of “Scribner’s” and “Literary Digest.” White designed many of the pedastals and bases for Saint-Gaudens’ sculpture.

In 1885, he moved to Cornish, New Hampshire, now the Saint-Gaudens National Historic Site, and in subsequent years was joined there by Thomas Wilmer Dewing, George de Forest Brush, and Maxfield Parrish as well as other painters. Together they established an important artist and literary colony in the area.

His career thrived throughout the 1890s, and like so many of his peers, he participated in the 1893 Chicago Columbian Exposition, serving as the Sculpture Consultant to the Director. In 1901, he served as a consultant on the city plan of Washington D.C. and in 1905, at the request of President Teddy Roosevelt, designed official United States coins.

He died in 1907 in Cornish, New Hampshire. Many of his works were left unfinished and were completed by his studio assistants.