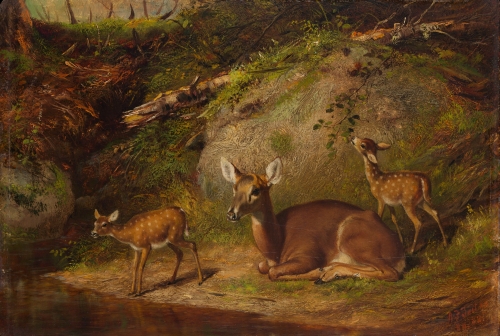 Born in Liverpool, England, Arthur Tait became America’s first important sporting artist. In England, he trained as a lithographer for Agnews, an art dealer in Manchester, and taught himself to paint by copying works at the Royal Institute. He also assisted American Indian painter George Catlin, with his traveling Indian gallery that he had brought to England, and Tait was impressed with Catlin’s subject matter and skill.

In 1850, Tait came to America to pursue his interest in wildlife and hunting, sports that were closed to the public in aristocratic England. He worked primarily from a studio in New York City and never got west of Chicago. Becoming a skilled woodsman and marksman, he acquired excellent first-hand knowledge that he brought to his paintings. As a result, his realistic genre hunting scenes, with their story-telling aspects, made him one of the 19th century’s most popular painters.

1850 to 1860 was his most productive period, and his frontier paintings were taken as literal views although he never got west of Chicago. His colorful sporting and wildlife paintings were usually Adirondack Mountain scenes, which were popularized through thousands of Currier and Ives reproductions and Prang’s chromolithographs. People loved the warm camaraderie of his hunting and fishing, cabin and campfire depictions, and he did much to focus public attention on natural scenery and wildlife.

He also mastered game still lifes, that influenced a succeeding generation of artists including Michael Harnett. Tait’s style was consistent and unchanging, and he had a long productive career until his death in 1905.