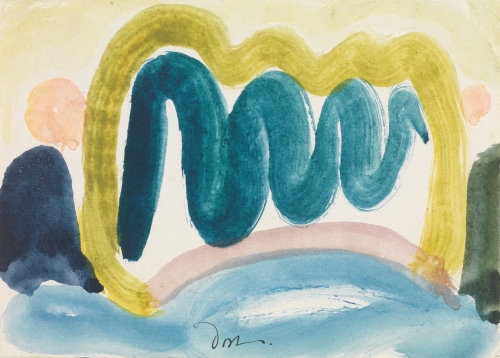 Born in Canandaigua, upstate New York, Arthur Dove was among the first twentieth-century American artists to produce purely abstract, or non-objective, paintings—a practice he continued to varying degrees throughout his career. Derived from landscape and organic subjects, many of his abstractions display the influence of Asian art. Dove used color freely along with calligraphic lines emphasizing energy or force. He generally made watercolor sketches outdoors and, later, oil paintings in his studio. Dove also created two- and three-dimensional assemblages from materials including aluminum, tin, copper, glass, wood, fabric, and found objects. He was a meticulous craftsman.

Named for the presidential and vice presidential candidates in 1880, Dove grew up in a conventional upper-middle-class family in Geneva, New York, where his father was a brickmaker and contractor. He started drawing at an early age and began painting at age nine with the encouragement of a neighbor, Newton Weatherby, who was a naturalist and truck farmer as well as amateur painter and musician. Weatherby inspired Dove’s lifelong love of nature.

Dove’s independent spirit surfaced early, when, at the age of twelve, he resigned from the Presbyterian Church for refusing to allow an atheist a right to his opinion. He later attended Hobart College for two years and Cornell University, where he studied law to please his father but became increasingly interested in art. A creator of humorous caricatures, he served as yearbook editor and, guided by an instructor, began gravitating toward illustration.

After graduating in 1903, Dove became a commercial illustrator in New York, working for magazines including Harper’s, Scribner’s, Collier’s, Life, and the Saturday Evening Post. He married a hometown friend, lived comfortably in the city, and painted in his spare time. Dove’s desire to paint increased, and he and his wife set sail for Europe in 1907. In Paris, he met Alfred Maurer, an American painter who was to be his best friend for the remainder of his life. Through Maurer, Dove gained entry to art circles that included Matisse, Picasso, and Cézanne. His style at that time was impressionist, but he and Maurer worked to reduce impressionism to larger areas of pure color in the manner of Matisse.

Dove returned to New York in 1909 and briefly resumed his illustrating career. He soon met influential photographer and gallerist Alfred Stieglitz and began exhibiting at Stieglitz’s avant-garde gallery, 291. The friendship and encouragement of Stieglitz and Georgia O’Keeffe proved extremely valuable to Dove, as had earlier connections with other progressive artists including John Sloan, William Glackens, and Robert Henri. The American public’s first exposure to Dove was a 1912 exhibit at Gallery 291. Dove’s work—which included a series of abstract pastels known as “The Ten Commandments”—shocked many viewers, who regarded him as a deranged modernist.

Struggling financially after returning from Europe, Dove moved his young family to a farm in Westport, Connecticut, in 1910. With little family support for his artistic career, his marriage eventually broke up in 1920. After the death of his first wife in 1929, Dove married his longtime companion, artist Helen “Reds” Torr. For years, the couple had been living together frugally on houseboats and as caretakers in private homes.

Dove inherited the meager estate of his parents in 1933 and moved to Geneva, where he tried to make a living as a farmer but had little success. In 1938, poor health forced him to an inlet on Long Island Sound. For the remaining six years of his life, he lived there as a semi-invalid, with painting as his only activity. Dove died of a heart attack in November 1946.

During his lifetime, Dove exhibited widely, with Alfred Stieglitz and at other venues including in museums such as the Whitney Museum of American Art and the Museum of Modern Art, both in New York, and the Phillips Memorial Art Gallery in Washington, D.C. Today, his work is represented in major private and public collections, including the Metropolitan Museum of Art, New York; Whitney Museum of American Art, New York; Brooklyn Museum, New York; The Phillips Collection, Washington, D.C.; Philadelphia Museum of Art, Pennsylvania; Yale University Art Gallery, Connecticut, and Randolph-Macon Woman’s College, Virginia.