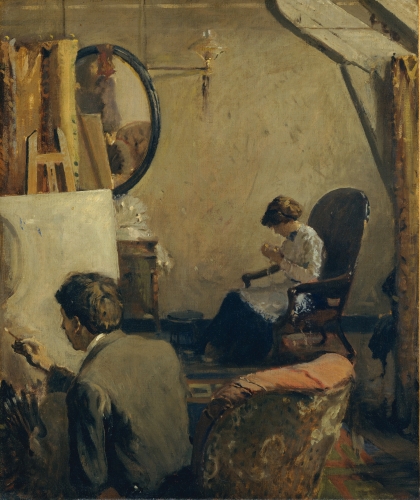 Louis Kronberg in His Studio in Copley Hall, ca. 1913

A painter especially known for street and waterfront scenes of Boston, Arthur Clifton Goodwin did work that captured the subtle nuances of light and color, creating a harmony between and the natural environment. His style reflected American Impressionism, although his subject matter was not typically rural. He preferred painting Boston and particularly scenes where the city met the natural landscape, such as piers, bridges, or the Boston statehouse. His “T” wharf series, representing the pier where boats of largely Portuguese and Italian origin would dock, were quite well known.

Goodwin was born in Portsmouth, New Hampshire, and was raised in Chelsea Massachusetts. He did not begin painting until the age of thirty and became a self-taught Impressionist and also a follower of the Ashcan School led by Robert Henri. After painting in Boston in both oil and pastel for a twenty-year period, Goodwin gained the recognition of famous art figures including John Singer Sargent, Mrs. Jack Gardner, and John T. Spaulding. Childe Hassam was quoted as describing Goodwin as “the greatest painter in Boston.”

However, Goodwin’s erratic lifestyle frequently cost him patrons as did the inconsistency of his pricing of his paintings.

In 1921, he left Boston for New York City and had a studio on Washington Square where he “developed a reputation as one of the few American Impressionists to prefer urban subjects” (Spanierman) including bridges, parks and avenues. He and his wife then lived in Chatham, New York where he painted many landscapes. In 1929, he returned to Boston and resumed his Bohemian lifestyle. That same year he died suddenly, found in his home by friends with his trunk fully packed and lying beside a steamship ticket to France.