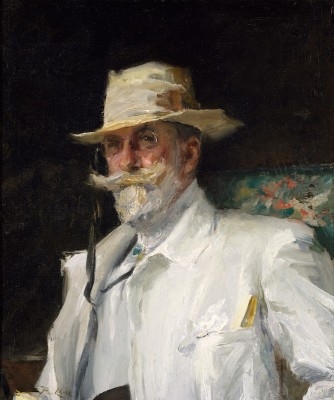 While at the Pennsylvania Academy, she won two Cresson Traveling Scholarships. Her travels to Europe included a stop in Florence, Italy where she continued summer classes with Chase. Prior to 1910, she also learned art composition from Elliot Daingerfield. She also received an Honorable Mention for the Toppan Prize. Her travels took her to London; Bruges, Belgium; Carmel, California; Paris; Rome; Venice; Florence; Brussels; The Hague; and Amsterdam.

In 1908, she exhibited her first work at a major venue, “In North Carolina,” at the Pennsylvania Academy. She would exhibit other works at that venue, the Art Institute of Chicago, the Carnegie Institute in Pittsburgh, the Corcoran Gallery in Washington DC and the National Academy of Design in New York City, where in 1910 she was praised by The New York Times critic for “The Gray Kimono,” and “Tea Time.” She exhibited at the International Exposition in Rome in 1911 and the Anglo-American Exposition in London in 1914. She was awarded a silver medal for her work at the Panama-Pacific Exposition in San Francisco in 1914.

Miss Lang painted several portraits of William Merritt Chase, one of which is in the Metropolitan Museum of Art. Chase also painted his pupil on several occasions, one of which is also in the collection of the Metropolitan.
She is represented in the Pennsylvania Academy by her portrait of her early mentor, J. Liberty Tadd; her work is also in the Minneapolis and Indianapolis Museums. Lang had a one-person show at Knoedler Gallery in New York in 1917, and was the subject of an article in International Studio Magazine, who commented on her richness of color, breadth and vigor of handling, strong and piquant grasp of character.

The Spanish Flu Epidemic of 1918 cut her promising career short. An obituary appeared in the International Studio Magazine in 1918. Copyright Roy Wood, Jr., 2005.