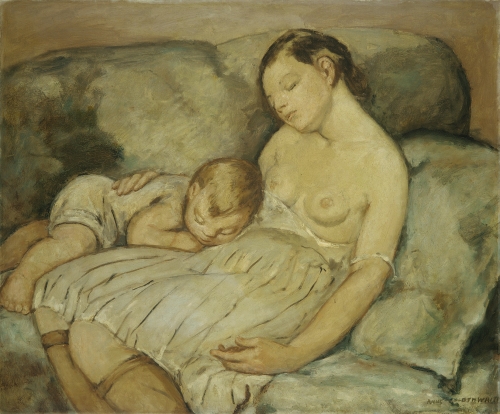 Born in Montgomery, Alabama, Anne Goldthwaite was a painter in early modernist style of southern subjects, especially Black Americans. Her work has been described as expressive rather than abstract, and because of her many etchings* and watercolors of southern life, many of them sympathetic to post-slave culture Negroes, she is also regarded one of the South’s most important regionalist artists. Shortly before she died, she completed two murals of southern genre for post offices at Atmore and Tuskegee, Alabama.

Goldthwaite was from a prominent Montgomery, Alabama family. Her parents died when she was young, and she was raised by an aunt. Goldthwaite was presented to society as a debutante and “seemed destined for the life of a Southern belle”, (Rubinstein) until her life took a different turn when the man to whom she was engaged was killed in a duel.

To get her mind on something else, she followed an uncle’s suggestion and went to New York to pursue her interest in art. She enrolled at the National Academy of Design* and studied etching with Charles Mielatz and painting with Walter Shirlaw, who remained her principal influence. In 1906 she went to Paris where she came under the influence of modernists Cezanne, Matisse and Picasso. Her adoption of modernism led her to join with other students to found the Academie Moderne with teachers Charles Guerin and Othon Friesz.

Reinforcing her commitment to non-traditional painting was her association with Gertrude Stein, one of the most influential avant-garde* persons in Paris of that pre-war time. Goldthwaite first met her when she was sketching at the Luxembourg Gardens. To the young artist Stein “looked something like an immense dark brown egg. She wore, wrapped tight around her, a brown kimona-like garment and a large flat black hat, and stood on feet covered with wide sandals.” (Rubinstein). However, when she saw Stein’s apartment and her extensive art collection of contemporary painters, she realized this was not an ordinary woman.

Just before World War I, Goldthwaite returned to New York and exhibited her work at the 1913 New York Armory Show*, which introduced European modernism to America. At this exhibition, she met Katherine Dreier, who became her life-long friend. Goldthwaite began teaching at the Art Students League*, where she was a very popular teacher until her death in 1944. She was also an advocate of women’s rights and equal rights for ethnic minorities.

In 1915, she established her life’s working pattern, which was living nine months in New York and then spending her summers with family in Montgomery, Alabama.

She died in New York City. Knoedler’s Gallery held a posthumous exhibition of her work in 1944 as did the Montgomery Museum of Fine Arts in 1977.