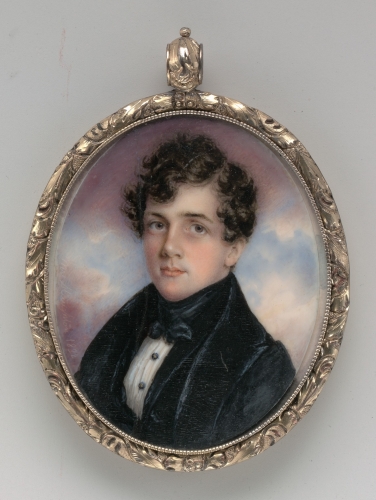 Anna Claypoole Peale was born on March 16, 1791 in Philadelphia, Pennsylvania. She was the daughter of James Peale and Mary Chambers Claypoole and one of their six children. Her formal education is unknown but she received an invitation from portrait painter Thomas Sully to attend a series of “anatomical lectures as relating to the arts” and her intention was to go to all of them if possible. At fourteen years of age Anna copied a painting by Vernet and sold it at auction for a good price. Her father urged her to become a portrait painter and she studied with him, specializing in portrait miniatures.

In 1818 and 1819, Anna traveled to Washington with her elderly uncle, Charles Willson Peale. He noted that she more easily obtained commissions for portraits than he. From around 1820, Anna divided her career between Philadelphia and Baltimore. At the same time her career escalated, she trained her only student in miniature technique: her niece, Mary Jane Simes.

In August 1829 Anna married the Reverend William Staughton in Philadelphia. She fully expected to give up her profession as a miniature painter. En route to Kentucky where he was to be President of a new Baptist institution, Georgetown College, Staughton became quite ill. He died in Washington on December 12, 1829. Anna was married again in 1841 to a Philadelphia philanthropist, retired Brigadier George William Duncan. Anna ceased to paint miniatures, and oils which she never really enjoyed. She survived her husband who died in 1864. Her sister, Sarah Miriam Peale came to live with her and Anna died on Christmas Day, 1878.