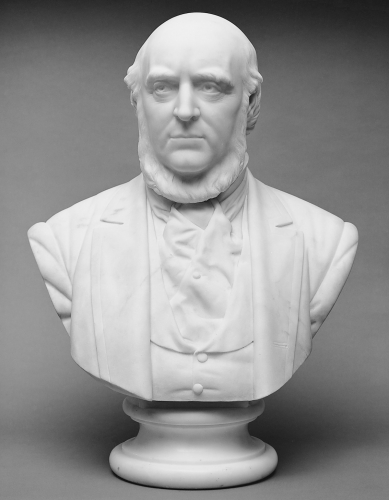 He was born into a wealthy New York family. Van Wart was a nephew of Washington Irving. From about 1870 he travelled extensively in Europe with his wife Caroline and father-in-law spending time in the south of France and London. He studied with the noted American sculptor Hiram Powers.

Ames’ vase with scenes of American Indian life is described in Graves (1905-6, p. 73) as a bronze. However the known version of this work is in the Metropolitan Museum, New York, and is a marble inscribed with its date and place of creation (London 1876). Other known works by Van Wart include a ‘Bust of a Quadroon Girl’ exhibited in Boston and New York in 1869 and a bust of his father-in-law, Captain Marshall O. Roberts, which is in the Metropolitan Museum.